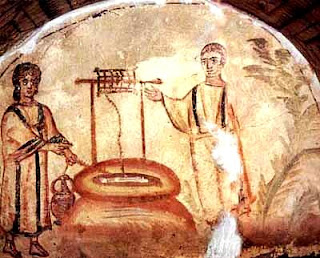 Today's homily isn't science fiction, but I'd like you to do some time-travelling with me. Let's imagine attending Mass 1500 hundred years ago, in the year 511, on the Third Sunday of Lent.

Many things about the sixth-century liturgy would be new to us. But at least one thing would be familiar: today's Gospel. For on the Third Sunday of Lent, even 1500 years ago, the Gospel reading was almost certainly the one we've just heard.

Why, do you suppose, given so many modern changes in the Church, are we following such an ancient plan—especially since there's no obvious connection between the Samaritan woman and Lent?

To answer that question we need to take a look at Lent. By 511 the overall structure of Lent—40 days of preparation ending with the rites of Holy Week and the triumphant Easter Vigil—was pretty much as we know it now, after some centuries of development.

The chief focus of Lent, though, was different. The VIPs, the people in the front-row seats during Lent, weren't the Christians in the congregation but the newcomers, those who had received the marvelous grace of a call to conversion.

These converts, called catechumens or "the instructed," had been kept waiting for a long time. For as many as three years they'd been taught and observed, and during all that time they had to leave Mass after the liturgy of the Word, since they were not yet ready to share fully at the table of the Lord.

Finally, though, they were almost ready for baptism. The home stretch was like a long retreat: for forty days they fasted and prayed, and received an intense and rich series of talks on the fullness of the Christian life.

The whole community eventually joined in, taking advantage of this period to look into their own hearts and to consider their own baptismal commitment.

The entire congregation shared in what has been called "the great catechesis" (Adrian Nocent, The Liturgical Year, vol. 2, p. 69). The readings of the first two Sundays of Lent presented the key themes of salvation: the reality of sin, made clear in the temptation of Christ, and the sure hope of victory, prefigured in the Transfiguration. (If you think back, those were the Gospels we heard last Sunday and the week before.)

Once the stage was set by those readings, things got up-close and personal. On the third and following Sundays came three powerful encounters between the convert and the Church. They were called scrutinies—not exams, but a series of special prayers over the catechumens casting out evil to prepare them for baptism.

We celebrated the first of the three scrutinies with our catechumen Maureen this morning. She moves closer each week to the new life of baptism, which she will receive at the Easter Vigil, and we rejoice with her. But we also must ask: are we moving ahead ourselves, or staying put?

The catechumens who'd waited three years for baptism, three years for the gift of the Spirit, and three years for the Body and Blood of the Lord didn't need a homily in 511. They were good and thirsty, and they'd have immediately applied the story of the woman at the well to themselves. They didn't need any encouragement to join in the woman's eager prayer: "Sir, give me this water!" The living water that Jesus promised her was the bubbling stream of grace and the cleansing flood of baptism for which they'd been thirsting for years.

Perhaps we're not so lucky. We've been sipping from the water for a long time, just enough to keep us from thirsting, and we may have forgotten what it feels like to take a good cold drink tastes like. Some of us are like hikers on a hot day who have enough water along to avoid dehydration, but not enough to enjoy.

With luck, though, the hikers will come across a mountain stream, with clear cold water racing over the rocks. They'll plunge their faces into to brook, and gulp the water freely, to slake their thirst, cool their bodies, and just for the sheer delight of it.

That's the experience today's Gospel offers each of us, no less than it did 1500 years ago, no less than Jesus did when he spoke with the Samaritan woman. Not a tepid Christianity that keep us from drying up, but a personal relationship with Christ that washes away past sins and irrigates our hearts with His life-giving Spirit.

Lent is many things: a time of penance, a time to take stock, a time of conversion. Most of all it is an invitation. Jesus asks us: do you want more? A trickle or a flood? He speaks to us no less personally than he spoke to the woman at the well, no less than to those preparing for baptism.

And he waits for an answer: not at Easter, but now. Meet Jesus at the well today. Sit quietly at home for half an hour, and ask for the gift of God. Ask for the living water, and meet your Saviour, the Saviour of the World.

Posted by Msgr. Gregory Smith at 7:09 AM No comments:

Is Real Change Possible? (Lent 2.A)

I wasn't too pleased by the idea of having a second priest in our parish. I told the Archbishop I thought that an assistant pastor would just cause me extra work—and besides, he'd probably leave his dishes in the sink.

As you already know, I couldn't have been more off-base. It's hard to imagine how we managed before Father Xavier came—and, let me add, he never leaves dishes in the sink!

One of the joys of having another priest in the rectory is talking over the Sunday readings while we're thinking about our homilies. It's very helpful to have someone to share ideas with, and to hear a different view of the readings.

At lunch yesterday, Father Xavier pointed out that God the Father says "This is my Son the beloved… listen to him," but if you take a close look, Jesus has almost nothing to say!

And certainly, His words in today's Gospel are few and not very startling. He seems to be talking to the frightened trio, not to us. So what is Jesus telling us at the Transfiguration?

Father Xavier suggested that our Lord's actions speak louder than words—that we find a message in how Jesus is changed on that high mountain. Because change is something every one of us thinks about, especially at Lent.

Which one of us is completely satisfied with the way we are—with the way things are in our lives? Who wouldn't like things to change for the better? Many of our prayers try to change things.

You can be sure that Peter and James and John were ready for change as they followed Jesus up the mountain. They'd been his disciples for a long time; they were all set for their Messiah to start sorting things out. This journey with Jesus had to be the start of something big.

And it was—but not the way they'd figured. Jesus didn't give them new powers. He didn't make the rain fall on the desert or the sun shine brighter. It was Jesus who changed. And in that moment he invited Peter, and James, and John, and every single one of us to change also.

Radiant on Mount Tabor, Jesus showed us that change comes from God's power, not ours. Jesus showed that conversion is a gift from God. And the words His Father spoke told us how it starts: by hearing the Word of God.

Pope John Paul wrote that "The proclamation of the Word of God has Christian conversion as its aim… Conversion is a gift of God, a work of the Blessed Trinity." (Encyclical Mission of the Redeemer (1990) 46.)

I don't want to run down my own homilies, but I am far from sure that ten or twelve minutes of preaching can convince anyone they need to be radically and totally changed. That's why we've bought a copy of this little booklet for every parishioner. It's called "Is Real Change Possible," and it's by my friend, the Catholic evangelist Peter Herbeck.

Peter's booklet tells the story of a Hollywood screenwriter who turned from cocaine to Christ and experienced a live-saving change. There's likely no-one in Church today whose life was quite so troubled, yet all of us have tried in some way to manage without God. And all of us want life-giving change in our lives—the freedom and transformation that Jesus offers.

I invite you to take this small booklet home, and to read it—and pray it—with an open heart. Ask the Lord what He wants to change in you this Lent. Ask for a share in His radiant purity.

"Holiness," Peter Herbeck writes, "is first God's work, but it demands our full cooperation and consent. It is a work that requires concentration, devotion, energy and trust."

Will you offer those things to the Lord this Lent, and allow him to offer a share in His holiness to you?

Posted by Msgr. Gregory Smith at 8:12 AM No comments:

Listen and Obey: Hear and Do! (Sunday 9A)

We have a new feature in the bulletin, called "Faith FAQs" that will offer answers to frequently asked questions about the faith.

No honourable person condemns someone else, unheard—and yet that happens all the time to Jesus and His Church. The simplest example in my experience is the Church's teaching on family planning, as taught by Pope Paul VI in the encyclical letter Humanae Vitae, issued in 1968. I've met many married Catholics who reject the teaching—I'm not saying that they just don't follow it through weakness, but that they reject it as wrong or backwards or whatever. And yet to this day, I have not personally met anyone who rejected the teaching after actually reading the encyclical.

And what's true of encyclicals is true of the Bible as well. So the first step to the Christian life is simply to give Jesus Christ a chance to be heard.

This doesn't mean memorizing rules, but it does mean reflection and study in areas of Christian living that confront or challenge us.

Although the Reverend William Barclay was a Scottish Presbyterian, he could count Archbishop Sheen among his fans. His interpretation of the Bible doesn't always square with ours, but when it comes to getting to the heart of what Jesus is saying, Barclay can't be beat.*

Similarly, he says, there's not much point in going to a doctor, unless we're prepared to do the things he tells us. What's the use of going to an expert, unless we're ready to act on his advice? And yet there are thousands of people who listen to the teaching of Jesus Christ every Sunday, and who have a very good knowledge of what Jesus taught, and who yet make little or no deliberate attempt to put it into practice. If we are to be in any sense followers of Jesus we must hear and do.

Today's Gospel could be our Lenten challenge. Do we need to find ways to listen to God's Word—either by reading scripture or by studying a Church teaching we don't understand or find difficult to accept? We want our faith to be founded on rock. If we've built on shifting sands, Lent is the perfect time to shore up our foundations through well-focussed study and prayer.

*Some of the material in this homily came from notes I made some time ago using Barclay's Daily Study Bible but I didn't accurately distinguish my notes from quotations, so there's probably some plagiarism here! But I can't find the book right now... My Dad remains very ill in hospital following open heart surgery eight says ago, so things are somewhat chaotic.

Posted by Msgr. Gregory Smith at 10:15 PM No comments: