God Responds to Hunger and Thirst (17.B) 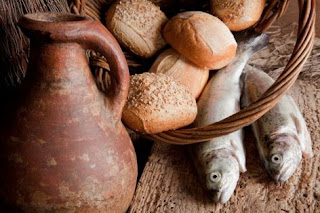 Sometimes a homily just writes itself.

This Sunday’s first reading begins with a man bringing the first fruits of his harvest to the prophet Elisha during a time of famine. Can you imagine what I thought when a parishioner and his young daughter arrived at the rectory door yesterday with a bag of potatoes, one of carrots, and the largest zucchini you’ve ever seen?

Turns out that this fine youngster has a plot in the garden devoted to growing things for the church! And while we don’t have a famine, we certainly have a drought.

It almost goes without saying that I was very touched and grateful. Unlike Elisha, however, I can’t work a miracle and share the fresh produce with you; I did divide it with a needy family, though, in the spirit of our readings today.

But I share the experience with you to help us understand the message the Scriptures have for us today. And perhaps the unusual weather can help us as well, since drought is the usual cause of famine and we’ve had a taste of that even though we haven’t gone hungry.

In both the first reading and the Gospel people are hungry. In Elisha’s time they are starving, in today’s Gospel the crowd’s just missed their lunch. Both Elisha and Jesus provide food miraculously, and so abundantly that there are leftovers. Human needs get met through the power of God.

That wouldn’t be a bad place to stop: recognizing God’s power is basic to discipleship. But there’s much more to be learned from the Word this morning.

What do we really know of famine or hunger? For that matter, what do we know of drought, when even the water restrictions we currently face—while it rains, no less—permit hand-watering of our gardens? (A lucky thing, or those vegetables wouldn’t have made it to my door.)

To benefit fully from the message of today’s readings, we need to look beyond their literal meaning. And we might start by thinking what it means to be spiritually dry or spiritually hungry. These are the worst droughts and famines of all.

Sure, Jesus filled the stomachs of the hungry crowd. But is there any doubt he first filled their hearts with hope?

Elisha’s mentor, the prophet Elijah, made rain fall in torrents after a years of drought; but it was his prophetic word and not just water that he gave to Israel.

We can and did pray for rain during these dry times in B.C. In fact, several days after we did so at Mass my entire family was soaked while we watched Theatre Under the Stars at Stanley Park. But what God really wants us to pray for is hunger and thirst—a burning desire for spiritual food and drink.

Today’s Gospel reading is the first of five passages from the Gospel according to John that are all about the Eucharist. For five Sundays we’re going to be talking about the Bread from Heaven, the real food and real drink that truly satisfies the hungry heart.

But we can talk all day without it making a difference if we’re not in touch with our hunger and thirst. Have you ever been too busy to eat? All of a sudden you realize you’ve missed lunch without so much as a pang of hunger?

And the doctors warn us that we need to drink water on hot days even when we don’t feel thirsty.

The same is true of the spiritual life. If we only turn to God when we feel the need, we will be malnourished and dehydrated.

The Archbishop of Detroit, Alan Vigneron, preached a homily that asked this question about spiritual dryness: “Are we not bored with Christ? Is not that the condition that the Holy Spirit needs to heal in our time? Have we not come to a time when, sad as it is, hearts no longer seem restless, but rather more drugged and befuddled?”

Together with Pope Francis, Archbishop Vigneron calls us to rediscover the joy of the Gospel. Quite specifically, he says we need to learn how to expect everything from God, even God himself. We need to ask the Holy Spirit to stir into a flame the embers of our faith if we are among the many “who seem to be all-in and all-committed.”

In his first homily here, Father Paul warned against “having a consumer mentality with regard to church.” He said that it’s “very easy for us to think in this way because that is often how things work in the world. But the church is not a service provider; it is the Mystical Body of Christ and the People of God who journey together toward God.”

How do those of us who are “all-in and all-committed” become more serious about that spiritual journey? We have gathered in church this morning—and so all of us are already headed in the right direction. But many of us feel things could be better.

This is exactly what we need to focus on: the thirst for more, the hunger for a closer relationship with Jesus. The next four weeks can deepen our love for the Lord in the Eucharist if we listen eagerly to what Jesus teaches us about the gift of his Body and Blood.

God will not send you away hungry or thirsty. As the psalm says, he opens wide his hand, and grants the desires of all who live.
Posted by Msgr. Gregory Smith at 7:53 AM No comments: 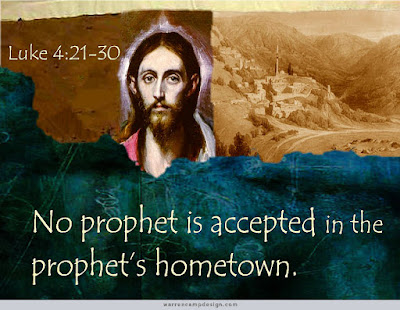 If Pope Francis is looking for some exercise, he should take up surfing. Because one thing’s for sure—the Holy Father is riding a wave right now.

The world has reacted with praise to his encyclical on the environment, called Laudato Si, and the Pope’s personal popularity is enormous. We Catholics are surfing right along with him, happy to hear folks who generally despise the Church tell us “we love your Pope.”

All this is good. Jesus wanted the Gospel to be attractive—he said “My words are spirit and they are life (John 6:63). Crowds loved to hear him preach.

Pope Francis also wants the Gospel to be attractive—he wrote “The joy of the gospel fills the hearts and lives of all who encounter Jesus.”

It’s all good, but it won’t last, unless Pope Francis has a very short pontificate. And this Sunday’s readings help us understand why.

I’m sure the first reading today caught the Holy Father’s eye. He would recognize right away a connection with Ezekiel. Poor Ezekiel was a “good news/bad news” prophet. God did not ask him to make people comfortable but to disturb them with his message.

Although he was preaching to his fellow exiles far from their homeland, he had to give them the straight goods: He told his fellow Israelites that their misery was not due to God’s failure “but because their own sins and their own infidelity.” (Scott Hahn, ed., Catholic Bible Dictionary, 273)

It’s a fair bet that that Ezekiel was not popular. He didn’t appear to have been persecuted like some other prophets, but surely the pain of speaking harsh truths day after day to his friends and neighbours was worse in some ways than being flogged or exiled.
Today’s Gospel reminds serious Christians that they’ll never be popular for long. Our message of repentance is no more welcome today than two thousand years ago. Sometimes it will be the world—by which today is meant the media, among other forces—that will take offense at us. Other times it will be the state or the educational establishment, or employers.

With the increase in religious persecution around the world, this is a good time to reflect long and hard on what the late Cardinal Francis George said when he was Archbishop of Chicago: “I expect to die in bed, my successor will die in prison and his successor will die a martyr in the public square.”

But sometimes the persecution is less dramatic, more like what Ezekiel had to deal with. Sometimes it will be our own family members, our own neighbours, who cannot deal with it when we hold fast to the faith. Jesus has told us clearly the price the faithful Christian may have to pay, even at home.

A hot summer day is no time to preach a long homily about misunderstanding and persecution! But in our thoughts and prayers today, let us ask God to remind us that every wave will eventually crash and that his power is made perfect in weakness.

Let us ask for the courage to be prophets who remain faithful to Christ and his message, in both good times and bad.

Posted by Msgr. Gregory Smith at 10:44 AM No comments: