The Cost of Discipleship (23.C) 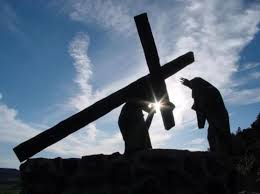 I wrote a pretty serious homily today now that the holiday season is over, but I spotted a story on the internet that can start us thinking about the demands of discipleship with a laugh.

Little Johnny's mother looked out the window and noticed him "playing church" with their cat. He had the cat sitting quietly and he was preaching to it. She smiled and said a little prayer that he might have a vocation. A little later she heard loud meowing and hissing and ran back to the open window to see Johnny baptizing the cat in a tub of water.

She yelled, “Johnny, stop that! The cat is afraid of water!”

Johnny looked up and said, “He should have thought about that before he joined my church.”

One of the many advantages of being a priest is that the folks you marry sometimes ask you to join them when they celebrate their 25th anniversary—and that becomes a really big advantage when they celebrate on a cruise ship! So I’ve just got back from a terrific holiday that included not only St. Petersburg—the focus of world attention last week—but also my first visit to Berlin.

My only disappointment was that there was no time in Berlin to look for any of the places historically connected to the Lutheran martyr Dietrich Bonhoeffer. There aren’t many Christians of the twentieth century who fascinate me more than this 39 year old pastor who was executed by the Nazis just three weeks before the end of World War II.

Bonhoeffer’s theological writings fill 16 volumes, but two words from his best-known book struck me thirty years ago and challenge me still: “cheap grace.” Cheap grace, he writes, is “grace without discipleship, grace without the cross, grace without Jesus Christ, living and incarnate.”

Bonhoeffer was, of course, a Protestant, but it’s fair to say his warning is particularly important for Catholics. We have the sacraments, we have a large and visible institution, and—dare I say—we offer excellent schools at affordable rates! It’s easier for us than for most to fall for cheap grace, Christianity without the cross, so-called “faith” without sacrifice or serious personal commitment.

Perhaps that’s why the meditation preached at the beginning of the conclave that elected Pope Francis reminded the Cardinals that the scandal of the cross is what humbles the proud human mind to accept the wisdom that comes from above. The elderly Maltese Cardinal Prospero Grech said “It is precisely the preaching of the absurdity of the cross that in less than three hundred years reduced to the minimum the religions of the Roman empire and opened the minds of men to a new view of hope and resurrection.”

“It is for the same hope that the modern world is thirsting, suffering from an existential depression.”

This “existential depression” cannot be cured by some feel-good remedy any more than the clinically depressed can be healed by a day at the beach.

Jesus steers us clear of cheap grace three different ways in today’s Gospel. First of all, he uses what the Greeks called hyperbole—he uses over the top language to make his point. Whoever does not hate their family and even their life itself cannot be his disciple—obviously not words to be taken literally, but words that underline a central truth: discipleship costs everything.

In a more material way, the final words of our Gospel passage make the same point: our Lord says “whoever of you does not give up all their possessions cannot be my disciple.” Again, the Church’s tradition has not taken these words literally, but they make the same point: if anything matters more to you than walking with Christ you are still unformed as his disciple.

Secondly, Jesus connects discipleship to the cross: “whoever does not carry their cross and follow me cannot be my disciple.” It’s interesting, isn’t it, that he doesn’t tell us to pick up his cross but our own.

Accepting in union with Christ the hardships life sends us personally is a key part of discipleship. That’s not to say, of course, that we don’t also need to crucify ourselves by voluntary penance and sacrifice. If you heard about Pope Francis’s call for us to fast for peace yesterday and didn’t respond, you might ask yourself whether you missed a small call to grow as a disciple.

Finally, Jesus gives us a good dose of Christian logic with two little parables. The story about calculating the cost of building the tower and the story about considering the size of the enemy army both remind us to use our heads when thinking how we want to live.

We say—most of us, anyway—that we want to follow Christ. But words are cheap unless we plan the actions that prove we’re serious. How many of us have looked ahead and thought about what living as a serious Catholic will demand of us?

Have we accepted in advance that our employment may be in some ways limited by our moral convictions or that our popularity at school might be lessened by living the faith?

Have we added up the resources—spiritual and emotional—that we will need to battle against the forces of a hostile world?

Is our family life—everything from schedules to budgets—different because we are trying to live as disciples?

When I look at the small percentage of parishioners who attend our first-rate adult faith formation programs, I sometimes wonder whether we’re strategic enough in preparing ourselves for the inevitable challenges and demands of Christian living.

A year or so back, I was reading Father Thomas Dubay’s book Deep Conversion, Deep Prayer when I came across a word I had to look up. The word was “velleity,” and it has haunted me ever since. A velleity is a wish or a desire that is not strong enough to lead to action.

Think hard about that. Jesus has just tried to tell us in the strongest possible language that true faith always leads to action. Real faith—the faith that moves mountains and can heal the depressed spirit of the modern world—is present only in courageous disciples who carry their cross and who put God first in all things.

Whether we look at Jesus, the saints, Dietrich Bonhoeffer, or the martyrs of this very moment we see action and sacrifice, not velleities. Discipleship challenges us to act on what we believe.

This is not a feel-good message, since—in Bonhoeffer’s words— “When Christ calls a man, he bids him come and die.” But only that which costs everything we have rewards us—in the words of the Collect for today’s Mass—with “true freedom and an everlasting inheritance.”
Posted by Msgr. Gregory Smith at 9:50 PM No comments: