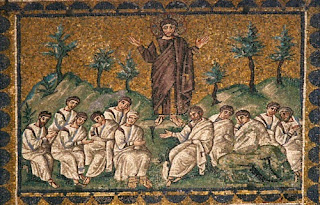 Oh Lord it's hard to be humble
When you're perfect in every way.

It’s been twenty years since Mac Davis wrote those words, but it’s still the best opening line ever for a country and western song.

Not being a fan of country music, I never actually listened to the rest of the song. But since it came to mind while I was writing my homily, I checked out the lyrics.  Far from being an attack on humility, it’s really a warning about pride.

The singer has no girlfriend, because no-one can compete with his charm, and no friends, because he wants to stand out in the crowd. “I’m doing the best I can,” is his last line, and it’s clear his best isn’t very good at all.

So what is humility?

Our English word comes from the Latin humus, which means “ground” or “soil.” In classical Latin it was a negative word used to describe unimportant or insignificant things, or persons of lowly birth or weakness of character. In Roman culture, which worshipped power and nobility, the lowly were viewed with contempt. The humble were treated with contempt.

The Old Testament took a different view of humility. Those who were lowly in the eyes of the world were special to God, who hears the cry of the poor. Since they had nothing but God, he took special care of them. Psalm 25:9 says that the Lord “leads the humble in what is right” and teaches them his way. Psalm 131 is the beautiful prayer of a humble person, whose heart is not proud, allowing him to trust completely in God.

This morning’s first reading is a prophecy that calls Israel to humility and promises its reward. The humble are actually protected from God’s wrath by their virtue. Lowliness is a blessing, because it leads to depending on God alone. The humble utter no lies, because humility is rooted in the truth: in the truth about God, in the truth about each individual, in fact, “in the truth of reality” (The New Dictionary of Catholic Spirituality, 516).

Jesus, whose leads us into all truth through the Holy Spirit (cf. John 13), fully develops the Old Testament view. He calls each disciple to be as humble as a little child (Mk 10:15) and to learn from him, for he is meek and humble of heart (Mt 11:29). At the Last Supper, he teaches by example, washing the feet of his disciples like a humble servant or slave.

The Gospel today is the high point of Jesus’ teaching on humility. He promises the lowly the kingdom of heaven. He offers the meek the whole earth as an inheritance. When his words reached the ears of the Romans, they’d have been mighty confused.

It’s not only Latin-speakers who can be thrown by this famous Gospel text. Almost all of us resist some of the individual beatitudes. Most of us are quite happy with “Blessed are those who mourn, for they will be comforted.” We don’t choose to mourn, and we’re big on comfort.

Since we’re Canadians, known for our non-militaristic attitudes, we probably welcome the promises made to peacemakers; and who has a problem with being pure in heart?

But things gets tougher to swallow when Jesus talks about being meek or merciful. Here we come up against social and psychological values that resist these virtues—or which see them as vices. Certainly being meek is seen as a weakness, and mercy can degenerate into unhealthy enabling of others.

However, Jesus did not get up on the mountain and announce “I’m about to give what might become my most famous sermon. I’m going to teach eight beatitudes; each of you please choose six.”

To show that his words are meant to challenge and even distress us, Jesus saves the hardest of all eight teachings for last: blessed are the persecuted. Even if we’ve stayed with the sermon all the way through meekness and mercy and the hunger for justice, the Lord seems to go too far when he gets to persecution.

There are so many ways to look at this dilemma, but this morning I’m offering only one. Because I think the Sermon on the Mount not only teaches humility—it also demands humility if we’re to really hear it.

Hearing these words of Jesus requires a certain attitude. And that attitude says, more or less, that God knows what he’s talking about. That God actually knows some things I don’t.

G. K. Chesterton develops this idea in his book Orthodoxy. He writes that “Humility was largely meant as a restraint upon the arrogance and the infinity of the appetite of man. … if a man would make his world large, he must make himself small.”

What proof do I have that mercy and meekness and persecution aren’t blessings? None at all—only my human way of thinking, which by definition in this case is opposed to God’s way of thinking, clearly stated in the Gospel we’ve heard today.

And what’s the cause of that? A lack of humility, a lack of the humble attitude that puts God in charge and restrains the arrogance and infinity of my appetite to know more than he does.

There’s the key to understanding and accepting the beatitudes: humility, which leads us to recognize that God’s perfect and I’m not. That only he, the Creator, sees the world exactly as it is, and me exactly as I am.

The same dictionary says that humility means grasping the truth about ourselves and about God. If today we accept what Jesus taught his disciples in the Sermon on the Mount, despite our human doubts and hesitations, we’re becoming more humble; because we’re slowly seeing things through the eyes of God rather than our own.

Because there’s only One who is perfect in every way, and it’s not Mac Davis.
Posted by Msgr. Gregory Smith at 7:34 AM No comments:

As most of you know, my mother has attended Mass at our parish since she moved to Vancouver in 2011, which is a great joy to me. But this blessing can have its down side.

On her first Sunday here, the greeter asked where she’d like to sit.

“The front row please,” she answered.

“Oh, you really don't want to do that,” the usher said. “The pastor is really boring.”

“Do you happen to know who I am?” Mom inquired.

“No," he said. “I’m the pastor's mother,” she replied indignantly.

“Do you know who I am?” the usher asked.

But to tell the truth, making sure each homily catches the attention of most of the congregation comes at a certain cost. Keep it lively can sometimes mean keeping the homily simpler than it ought to be.

I found this out when I gave a longer-than-usual, more-serious-than-usual homily at a weekday Mass recently. Afterwards, a keen young parishioner said “I wish you’d preach like that all the time.”

So today I thought I’d try a more-serious-than-usual homily, though I will try to make sure it’s not a longer-than-usual one.

Because our Gospel today goes straight to the heart of why we’re here this morning. Not because the Church says we must go to Mass every Sunday. Not because we need this time of community with other parishioners. Not even to hear a good homily.

We are here, first and foremost, because the Lamb of God takes away the sins of the world.

And he tells the priests that there’s someone in their midst, someone they don’t recognize, who will answer all their questions.

Only one day later, in the text we’ve just heard, the moment to reveal Jesus has come. John could announce he is the Messiah. He could call him King, or the new Moses. Instead, he announces that Jesus is the Lamb of God who takes away the sins of the world.

The title’s not as obvious as Messiah or King or Lord. The Jews would need to wrestle with it—just as we do.

The first place to look if we want to understand the meaning of “lamb of God” is in the Old Testament. And the obvious place is the Book of Exodus, which tells the story of the unblemished Passover lamb, whose blood was put on the doors of the Israelites to protect and spare them.

This lamb—and its blood—are “the symbols of Israel’s redemption at the first Passover.” (CCC 608)

The Prophet Isaiah adds to our understanding of this title. The Suffering Servant of the Lord is “like a lamb that is led to the slaughter.” (Is. 53:7b) In the same passage, we read the prophecy that his life is “an offering for sin” and that he bears “the sin of many.”

The Prophet Jeremiah becomes a figure of Christ when he says of himself “I was like a gentle lamb led to the slaughter.” (Jer. 11:19).

The New Testament sums this up when St. Paul writes “Our paschal lamb, Christ, has been sacrificed.” (1 Cor. 5:7) St. Peter tells us that we have been redeemed “with the precious blood of Christ, like that of a lamb without defect or blemish.” (1 Pt. 1:19)

Small wonder that John the Baptist was inspired by the sight of Jesus to reveal him as the Lamb of God. No other words could have expressed so briefly the nature of Christ’s mission nor its fulfillment of all God’s promises through the ages.

The question this morning is whether those words still speak to us with power.

When we pray “Lamb of God, who takes away the sins of the world”—repeating the Baptist’s words not once but three times—is the reality of the new Passover in the back of our minds? Do these words put us in touch with the big picture at Mass—that we’ve been redeemed by the saving blood of Jesus, poured out on the Cross and poured over us in the Eucharist?

Father Xavier was visiting us this weekend, and offered the 9 a.m. Mass. He just headed out to the airport on his way to India for vacation. When I asked him what he planned to say in his homily, he said that the prayer “Lamb of God, you take away the sins of the world, have mercy on us” is the one prayer God always answers immediately.

I asked him to explain. He pointed out that less than ten seconds after we pray to the Lamb of God for mercy and for peace, the priest lifts up the Host and says “Behold the Lamb of God, behold him who takes away the sins of the world.”

In other words, here is the answer to your prayers—Jesus is here, to spare you, to save you, and to heal you.

Let’s make these words truly a moment of adoration, petition and grace—not a routine, but a statement of our faith in the power of Christ to save us through his Eucharistic sacrifice.

Posted by Msgr. Gregory Smith at 8:49 AM No comments: