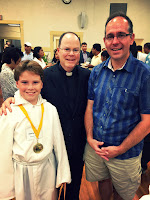 A few years back, the Canadian armed forces ran a recruiting campaign with the enthusiastic slogan “There’s no life like it!” Those words express my feelings about the priesthood, even after nearly thirty years.

Daily satisfactions abound, but last weekend I had an experience that tied together three decades of priestly joys.

Every year the Archbishop gives awards to two altar servers nominated from each parish in recognition of their dedication. I’ve never been able to attend the celebration at the Cathedral; at first it conflicted with our parish Mass, and in recent years with the diaconate formation weekend.

The servers of the year from Christ the Redeemer Parish were Emma, whose quiet faithfulness to serving weekday Masses is exemplary, and Gabriel, who stands out for his particular love of serving and the reverence he shows at Mass.

Gabriel attends our parish school, so when I saw him last week I explained why I wouldn’t be there to see him receive the award. He nodded respectfully, but I could see his disappointment, so decided to steal away from the diaconate group and drive back to the city on Saturday morning.

After watching proudly as Emma and Gabriel were honoured by Archbishop Miller, I popped in to the reception that followed Mass. As I waited for the group picture to finish, a man came up and greeted me warmly. I recognized him right away as Marty Cayer, a parishioner at my first parish, whom I’d married to Lora, a lovely girl whose family were also very fine parishioners at St. Patrick’s.

Marty and I were reminiscing when Gabriel appeared. As I made introductions, I did some hasty math and realized to my astonishment that Marty, now 40, had been exactly Gabriel’s age when he served Mass for me at St. Pat’s with much the same devotion and loyalty.

The coincidence—is that really the right word?—hit me with great force, and a wave of emotion came as I tried to explain to young Gabriel what it meant to a priest to stand with two “bookends” embracing three decades of ministry as a priest.

I suspect that young parishioners would be very surprised to know just how much we treasure their love and respect for us as priests, and what it means to see them grow as we ourselves age.

Life permits me only the occasional meeting with Marty and Lora, but they are part of the fabric of my life. And Marty has contributed one of my favourite memories from the eight happy years I spent at St. Pat’s, a story with which I will end this little reflection.

It was Christmas, 1986, at Shaughnessy Hospital, where I was taking Holy Communion to a group of residents, mostly veterans. I’d brought Marty along as a server because I thought these elderly men, some without families, would welcome the sight of a youngster on Christmas morning. All went well until an old man all but commanded Marty—a server, not a chorister—“sing us a song!”

Marty had as much enthusiasm for a solo performance as any 11 year-old boy. But with no hesitation, he pulled back his shoulders and started to sing in a loud clear voice.

What carol he sang, I cannot remember. But the moment I will never forget.
Posted by Msgr. Gregory Smith at 5:14 AM No comments: 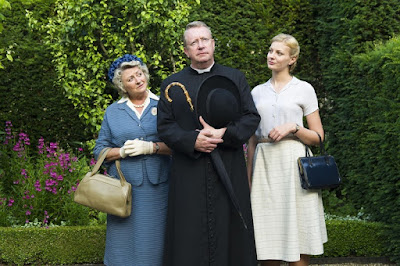 Father Paul was on holidays this week, so I found myself eating dinner in front of the TV.

That wasn’t all bad, though. It gave me the chance to watch a few episodes of Father Brown, the BBC drama that features the priest-detective created by the great Catholic writer G.K. Chesterton.

Last night, the mystery centered on a German priest who came to preach in Father Brown’s parish in an English village. It’s not long after the end of the World War II, so feelings are still running high. Although Father Brown welcomes him warmly, the parishioners are another thing entirely.

The worst offender is Mrs. McCarthy, the nosy and bossy parish secretary. She makes one anti-German remark after another in a stage whisper that the visiting priest can’t fail to hear. The housekeeper treats him badly even after he bandages her wounded hand. And various townspeople snub him every chance they get.

Their behavior isn’t hard to understand or even to forgive, so soon after the war. What’s really troubling is that they are all Catholics. We see them at Mass, at church socials, and in the rectory. But they do not see the contradiction between their faith and their actions.

We could say they were blind. Blinded by anger or pain or loss, but blind nonetheless. They are blind to this opportunity to live the Gospel they profess to believe. Mrs. McCarthy has said the words “forgive us our trespasses as we forgive those who trespass against us” thousands of times, but she is deaf to what they mean in a concrete situation.

When I do or say something I know is wrong, I am sorry for it. I apologize or mention it in confession, and I resolve not to do it again. But what about the times when I am blind to what I’m doing, or deaf to the demands of the Gospel?

This, to me, is something very scary. There’s a line in Psalm 19 that I pray with passion: “who can detect all his errors? From hidden faults acquit me.”

Worst of all are sins that masquerade as virtues. It’s hard to dislike Mrs. McCarthy, because, as the saying goes, “she means well.” But all too many of her well-meaning actions are the fruit of her own weaknesses and insecurities—they serve her need for recognition rather than the needs of others.

Today’s readings might have done her some good if Father Brown had read them at Mass in his little parish church. His parishioners might have understood that only Jesus can open their eyes to themselves, and unplug their ears to the full force of his message.

And then again, maybe not. Many of those astounded by the miracle Jesus works in today’s Gospel did not recognize that they also needed healing, though not of a physical sort. Not all of those who heard him preach chose to be Christ’s disciples—which is why he said “Let anyone with ears to hear, listen!”

Will today’s readings do much good for us? Maybe, maybe not. I am nothing like Father Brown, except in the size of my current waistline, but I think we all have much in common with his parishioners. We hear more than we listen; we see more than we understand.

To put the teaching of Christ into action—whether we’re talking about loving our enemies or loving our neighbours—we need to do more than read Scripture or listen to homilies. We need the personal encounter that the deaf man had with Jesus—a personal and private encounter where he can heal what needs to be healed in us and set us free from what makes us prisoners.

Like the deaf man, we need the healing touch of Jesus if we’re going to really hear the Gospel we listen to every Sunday. Only his personal touch brings the fullness of joy that Isaiah describes in our first reading.

Let’s ask ourselves whether there are areas in our lives where we’re deaf to Jesus or blind to the needs of others.

Last week, a single painful photograph of a drowned child opened the eyes of the world to the needs of refugees. Christians do not depend on the news media to make them aware of their responsibility to help the suffering. What we need is the touch of Christ, the grace that truly opens our eyes and ears to the Word by which we profess to live.

I probably should end with that prayerful thought, but I want to go back to Father Brown and his parishioners for a moment. Although they weren’t on their best behavior last night, there is much about them to admire, and they do come off very well in regard to today’s second reading.

St. James warns against an obvious evil that can easily divide a Christian community—favoring the rich or powerful. It contradicts God’s love for the poor and puts up barriers between brothers and sisters in the Lord. Some of the Church’s problems in other countries are connected to the special treatment that landowners and nobles received when they went to Mass.

But there’s no sign of the problem in Father Brown’s parish, where Mrs. McCarthy is just as rude to the local countess, Lady Felicia, as she is to everyone else. And there’s something quite significant about the fact that Lady Felicia’s chauffeur joins her at Mass.

Even a woman just out of prison is welcomed on Sunday with only a sniffy look or two.

For all our failings, our parishes do a pretty good job of living out the wise advice St. James gives us today, with rich and poor sharing a pew, and a sense of equality among God’s people.

As James Joyce wrote in Finnegan’s Wake, Catholic means “Here comes everybody.” Which is just as things ought to be.
Posted by Msgr. Gregory Smith at 6:54 AM No comments: