Another Message from Bishop Barron

Hours after my last post, which included a link to a video from Bishop Robert Barron, another one arrived. Again, I haven't had 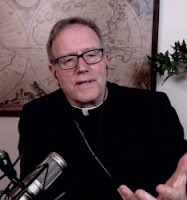 time to watch it, but I feel I should add this resource to the one I mentioned earlier. Bishop Barron speaks to the painful but very current question Why Remain Catholic? (With So Much Scandal) that I also addressed less directly in my homily last Sunday.
Posted by Msgr. Gregory Smith at 7:47 PM No comments:

To Whom Can We Go in Time of Scandal?

If you ask when I became a Christian, my answer would be early in May, 1955, when I was baptized.

But ask the same question to any of our Protestant Evangelical brothers and sisters, and their answer will be very different. They probably won’t mention baptism at all. They might say “I made a decision for Christ on my eighteenth birthday” or “I accepted Jesus as my Lord and Saviour ten years ago.

Today’s Gospel, in light of the deepening scandal in the Church, asks us Catholics to consider giving their personal answer to the question “when did you become a Christian?”

But let’s begin with the first reading. It also contains a question.  Joshua is nearing his death, having lead the people into the Promised Land. He knows the temptations they will face, now that they have left behind the foreign gods of their exile.

And so he first asks the leaders and the people of Israel to think about all that God has done for them. In a part of his speech we don’t read today, he reminds them how God delivered them from their slavery in Egypt, and protected them on their long journey.

And then Joshua offers a free choice. Decide today whether you want to serve the gods you worshipped in your exile, or the Lord God.

The people answer without hesitation. Their memory of God’s deeds is still very fresh, and they choose the Lord.

Jesus gives an equally free choice to his disciples in today’s timely Gospel. He knows that some of the crowd following him haven’t believed all along. But now he realizes that some others have found it impossible to believe what he said about himself.  Bread of Life? His flesh real food? Blood real drink?

His words are too much for these disciples. They walk away.

The word “scandal” means obstacle comes from a Greek word meaning a snare or a stumbling block. It was something to trip over. Jesus’ teaching about the Eucharist was something those former followers couldn’t get past.

As they walked away, Jesus turned to the apostles, to the inner circle of his followers.  He didn’t say “oh don’t you go!”  Rather, in all gentleness, he asks them “Do you also wish to go away?”

Their answer to each other, at this point anyway, is the answer St. Peter gave to Jesus. “To whom can we go?”

In some ways, God’s mercy has prepared us all for the question “Do you also wish to go away?” For five weeks, Jesus has told us that he is the Bread of Life, that his flesh and blood are real food and real drink.

Sunday after Sunday, the Lord has revealed to us the life-giving power of the Eucharist—food and drink to sustain us on earth, and the Bread of Heaven that endures to eternity.

We have heard everything that the disciples and apostles heard about the great Sacrament we are about to celebrate and receive. Now, or in the days ahead, we will need to listen to Christ ask “Do you also wish to go away?”

Explanations and apologies for the current crisis will not keep anyone—priest or layman—coming to Church. Some will turn back, and no longer walk with us.

But those who remain will, I believe, be those who pray “Lord, to whom can we go? You have the words of eternal life. We have come to believe and know that you are the Holy One of God.”

It may be that there will be people who, when asked “when did you become a Christian?” may even answer, “when scandals in the Church required me to make a decision for Christ.”

I would like to end with one personal comment. To have a seminarian living in the house during these difficult times has been painful for me.  What do you say to an idealistic young man as he prepares for the priesthood?

As things turned out, what Felix said in his short talk after Mass on Friday were words for us to hear. Referring to the smoke from forest fires that clouded the sky last week, Felix pointed out though it obscured the sun, the sun continued to shine.

Evil in the Church has obscured our vision, but God is still with us, and loving us at this time of pain and sorrow.

There have been countless statements trying to help people come to terms with the present crisis; I haven’t had time to keep up with them, but it’s likely that Bishop Robert Barron has some helpful things to say, so you may want to watch this. (I have not had time to watch it myself, so this is not a blanket endorsement of what he has to say.)

Posted by Msgr. Gregory Smith at 5:45 AM No comments:

I began my sermon by reading Archbishop Miller's bold and fatherly letter to us. You can see it here.

I really have no idea what to say to you this morning. Each of you will have your own reaction to last week’s horrifying news about the extent of abuse and cover-up in parts of our beloved Catholic Church.

For some, that adjective “beloved” may not even fit any more.

So all I can really do today—I will speak about this tragedy again next week—is tell you about my experience.

The Pennsylvania grand jury report came out while I was in the U.S.  But I was in a monastery, shielded from TV and newspapers, and even from much conversation. As a result, it was the Word of God that shaped my thoughts about these awful revelations.

And what I thought about wasn’t so much my reaction as God’s reaction.

Last week, the monks were already reading each morning from the Prophet Zechariah. He spoke God’s prophetic word to Israel 2500 years ago - but what we heard on Thursday morning could have been written yesterday.

The passage (Zech. 11:4 - 12:8) is God’s judgement on bad shepherds, on those who do not feel for their flock. (Let’s remember that our English word pastor, applied to both bishops and priests, is the Latin word for shepherd.)

Zechariah’s prophecy even contains words we later hear in the Gospel of Matthew “So I took thirty pieces of silver and threw them into the treasure in the house of the Lord.”  Could there be a more damning judgment than to associate the unfeeling and uncaring shepherd with the traitor Judas?

The reading was long and painful. It culminates with these words:
“Woe betide the worthless shepherd who abandons the sheep!
May a sword fall on his arm and on his right eye!
May his arm be all shrivelled,
and his right eye be totally blind.

Are we angry? Not so angry as God is.

No one listening to Zechariah could possibly have missed the point, but the monastic liturgy carried on relentlessly; a homily from St. Gregory the Great followed the scripture reading.

The homily begins by pointing to the Good Shepherd, who is Christ himself, who lays down his life for his sheep and who feeds them with his body and blood, as we heard in today’s Gospel. But then St. Gregory, who was Pope in times as turbulent as our own, turns to bad shepherds—whom he calls hirelings, the mercenaries who abandon the flock when the wolf approaches.

It was stunning to hear this line: “He flees because he has seen danger and wants to keep silence – because in fact he has hidden himself under a veil of it.”

A veil of silence! More than fourteen centuries ago.

The indictment continues: “… his concern is with mere outward appearance and creature comfort; not for him to fret about his flock, their discomfort and their inward suffering.”

Are we deeply wounded? No more than the good shepherds, the good bishops who, like St. Gregory, who stood their ground against evil regardless of the cost.

Using ancient words to address these revelations may seem out of touch to some. Yet I believe that the Word of God—and especially the Old Testament stories of repeated infidelity—is the best lens through which to view this crisis in the life of the Church and in our lives.

And St. Gregory reminds us that bad shepherds are only part of the story. He says “there is another wolf which every day, without ceasing, tears, not at our bodies, but at our minds. It is the evil spirit. All unbeknownst, he stalks the tail end of the faithful, seeking out dead souls. So likewise the wolf scatters the flock when the devil harries with his temptations the ranks of the faithful.”

We can’t allow the evil one to use scandal to destroy our relationship with Christ, the Good Shepherd.

Angry and wounded though we are, we must look to our own personal relationship with Jesus, asking right here at Mass for spiritual food, the living bread, that will sustain us in a difficult journey of Church reform and personal renewal.

Let me end on a personal note. Although I was away all week, I’ve already heard from some of you. One phone message touched me deeply, and I’d like to share it with you:

“I’m away on holidays, and I just want to tell you—especially in light of everything that happened in Pennsylvania and everything—that I’m worried about the Church.   I’m going to be coming to you when I get back about how I can help more to get our youth involved.  I’m not disillusioned at all but I’m disappointed in a lot of stuff that happened and I want to be part of the solution. If you could help guide me on how to be a better steward, I really want to be that positive influence.”

God is not finished with us, or with his Church.

Posted by Msgr. Gregory Smith at 1:54 PM No comments: