I was reading the account of Margaret Thatcher's 2013 funeral by the Wall Street Journal columnist Peggy Noonan. Something she wrote caught the spirit of the funeral yesterday of my dear friend Sister Josephine; it was even more accurate a description of the vigil prayers the night before.

Here's what Peggy Noonan wrote: "Thatcher's funeral was striking in that it was not, actually, about her. It was about what she thought it important for the mourners to know."

Posted by Msgr. Gregory Smith at 4:36 PM No comments:

Mercy the Key to a Good Lent (Sunday 5.C) 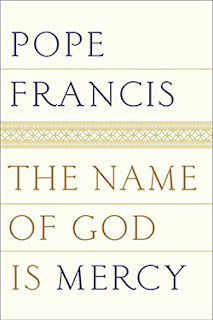 I’ll never forget talking to a young parishioner who saw me for spiritual direction before he moved to the Prairies. I asked “what are you doing for Lent?” He said very simply “Adding an extra half-hour of prayer, and giving up red meat, alcohol, and hot showers.”

Most of us, if we’re honest, no longer see Lent as a big deal, if we ever did.

Certainly the numbers who come to Mass on Ash Wednesday in our parish suggest that people today value the day less than in the past. It seems, generally, that Lent doesn’t meet people’s need for a bracing wake-up call. I hear rarely about serious penance, except occasionally from young Catholics, and I certainly don’t do serious penance myself.

In a book on the Lenten liturgy, the French monk Adrian Nocent even asks whether the traditional disciplines of prayer, almsgiving and mortification or self-denial are still effective means nowadays of changing our hearts and reforming our lives.

He does think they can: that Lenten practices remain important—but says we need to go beyond thinking of Lent in terms of what we do and start thinking about what God does.

We must, Father Adrian writes, stop thinking about Lent “first and foremost in terms of ‘practices.’ We must experience it rather as a time when we open ourselves to the divine life that God seeks to restore to us.”

Prayer, almsgiving and self-denial are just keys that unlock our hearts to God’s work of restoration.

But there are also padlocks that stop us from experiencing Lent as a kind of “sacrament,” an experience that can really and truly change us.

The first of these is staying so far away from the holiness of God that we don’t realize our own unholiness. The second is thinking we’re so bad that God can’t do anything with us. And the third padlock is being afraid to tell it as it is—to admit we’re sinners and in need of God.

The prophet Isaiah draws close to God and so knows he is unworthy. St. Paul knows he’s been a great sinner, but also that he’s been made whole by grace. And St. Peter falls at the feet of Jesus confessing himself to be a sinful man.

In all three cases, the mercy of God holds them up and sends them out.

In the first reading, Isaiah has an intense experience of the majesty of God. I don’t know about you, but if I saw the Lord seated on his throne attended by angels, my first thought would be “Oh my—I’m special!”

But Isaiah, who was listening to God in prayer long before this vision, has only one immediate thought: I am not worthy.

That’s a mark of authentic religious experience: the closer we draw to God in prayer, the less convinced we become of our righteousness.

In the second reading, St. Pau l says something remarkable. “I am the least of the Apostles, unfit to be called an Apostle, because I persecuted the Church of God.”

How beautifully Paul balances his knowledge of past sin with his gratitude for present graces! If he were around this Wednesday he would receive the ashes with mixed feelings—with sorrow for his sins but a deep sense of God’s goodness.

This all comes together in today’s Gospel, where St. Peter, like Isaiah, glimpses something of the glory of God, through the miraculous catch of fish. As it did with Isaiah, the experience provokes a profound sense of unworthiness in Peter, who’s quick to admit it to Jesus.

In a new book, an Italian journalist interviews Pope Francis about mercy. The Pope tells him that the first and only step required to experience mercy is to admit we need it.

That’s just what Isaiah, Peter and Paul all did. Only Paul was motivated by a memory of grievous sin; the prophet and St. Peter simply knew they were unworthy to be so close to the holiness of God.

St. Peter’s successor, Pope Francis, will no doubt have preached a terrific homily today, judging by what he says in this new book, which is called The Name of God is Mercy. The interviewer asks him how we recognize that we are sinners. He asks “What would you say to someone who doesn’t feel like one?”

The Pope doesn’t miss a beat. To someone who doesn’t feel like a sinner, he says “ask for the grace of feeling like one… because even recognizing oneself as a sinner is a grace.”

If we know ourselves as sinners, let’s walk up the aisle for the ashes on Wednesday with the confident hope of St. Paul and the deep humility of St. Peter.

But if we don’t think we’re sinners, if we feel like saying “who do you think you are, calling me dust?” then let’s come forward anyway, asking God for the grace of feeling like a sinner, so that we may begin Lent well.

Ash Wednesday, in this year of mercy, is a great day for that.

Once we have removed these common obstacles, unlocked these padlocks to receiving mercy, only one thing remains: to show mercy to others. How can we receive from God what we withhold from family members, friends, enemies, colleagues, and fellow parishioners?

Lent is a time to show mercy—for mercy, Pope Francis says, is “the beating heart of the Gospel.” It beats in the heart of Christ for each of us, but it must beat in our hearts for others.
Posted by Msgr. Gregory Smith at 7:49 AM No comments: