Intentional Disciples: Have No Fear! 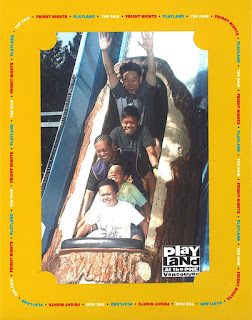 The always-amazing Father Paul Goo chose to give our parish a gift on the Sunday when we celebrated his farewell.  (He leaves us after two years for studies in spirituality at the Gregorian University in Rome.)

In his homily yesterday, he presented a clear summary of what it means to be an intentional disciple.  Since forming intentional disciples is currently our parish focus and goal, his words will be echoing well after he's unpacked his bags in the Eternal City.

A parishioner also shared this blog post from her brother in Prince George.  It's also an excellent summary of what intentional discipleship means and of the fine work of Sherry Weddell and the Catherine of Sienna institute.

Posted by Msgr. Gregory Smith at 8:47 AM No comments: 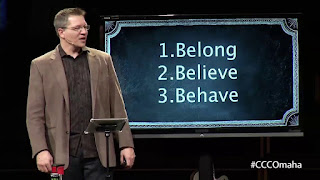 Everyone’s heard about the success of our Alpha Course, which ends this Thursday night. The question now is: what next? What comes after Alpha—both for the guests and the hard-working team?

For the team, it’s an easy answer: a well-deserved rest. They’ve been cooking and cleaning and hosting for months.

But after that, we’ll need to offer opportunities for continued growth in Christ and to explore ways of helping people move from curiosity to discipleship.

And, of course, it’s not just about Alpha. Many of us struggle with that big question “how do I develop the relationship with Christ I keep hearing about?”

Yesterday sixty or so parish leaders spent the entire day trying to answer these questions, for themselves and for our parish family. We were guided by Kathleen Coolidge from Colorado, where she works with Sherry Weddell, author of the book Forming Intentional Disciples.

After nearly eight hours of prayer and reflection, the group reached two simple conclusions. The first is that our parish must begin asking God to show us how to become intentional disciples and how that can make us a parish of missionaries. We need to pray fervently for a harvest both inside and outside of the parish.

The second conclusion is that we need small group faith studies—groups of five or six where we can share and deepen our faith.

You’ll hear lots more about this as our parish plan for evangelization—funded entirely by Project Advance 2017—moves forward in the months to come.

Today, let’s not focus on the future but on the present. I’d like to ask you a really simple question: why are you at Mass today?

It’s a personal question, and everyone will have a different answer. But I suggest that our answers will relate to one or more of these three things: Behaving, Belonging, or Believing.

Some folks come to Mass for what’s called “fire insurance.” They want to stay clear of hell, so they take seriously the Christian obligation of Sunday worship. They’re behaving.

Others aren’t so worried about the next life. They come to Mass because they feel part of a community. They have ties to the parish, or the school, or the neighborhood, and gathering with others feels right or even necessary to them. In a word, they belong.

Thirdly, many people come to Mass because they believe. Their hearts are convinced of the truth we celebrate in today’s feast—that in the Eucharist they receive the Most Holy Body and Blood of Christ.

In the first reading, Moses reminds the Israelites of the commandments of the Lord. Every school child knows that one of them is to keep the Sabbath day holy. He urges obedience to the law of God, who has shown them his power in so many ways. Moses builds the case for behaving as God commands.

In the second reading, St. Paul says that we are one body, precisely because we share in the one cup and the one loaf that is the Body and Blood of Christ. He is tell Christians in a very powerful way that they belong around the table of the Lord.

In today’s Gospel, Jesus invites us to believe—to believe in something even some in his audience had trouble accepting. It’s not a simple teaching: he says one, he is the living bread; two, that it comes down from heaven; and, three, that those who eat this bread will live forever. For some of his listeners, this was just too much to swallow.

We’ve heard the teaching so often that it’s lost some of its shock value. Don’t forget that in the same conversation there were people who thought Jesus was talking about cannibalism.

Other than Jesus himself, no one has ever offered a better reason for us to be here than St. Thomas Aquinas. In an antiphon for the first feast of Corpus Christi, almost 800 years ago, he wrote this about the Eucharist: O Sacred Banquet, in which Christ is received, the memory of his Passion is recalled, the soul is filled with grace, and the pledge of future glory is given us.

If you are here to behave, God bless you. We live in a disobedient world, so you’re doing something good and praiseworthy.

If you’re here because you feel you belong, welcome! Our parish will always do its best to be a welcoming and inclusive place, where everyone is treated as family.

But all of us—including behavers and belongers—are called, at our own pace, to become believers who receive the Body and Blood of Christ as the living bread that brings life, now and forever.

And all of us have been called to be here so that we can know how much God loves us. Jesus gave us his Body and Blood because he loves us. We’re here because God loves us.

This Sunday, please join me in praying with thanks to God for the success of Alpha and yesterday’s workshop, with hope for the fruitfulness of what comes next, especially parish faith studies, and with joy on this glorious feast.

Let’s use words adapted from the American monk and writer Thomas Merton: As we celebrate the Eucharist today, let us feel God’s love so powerfully that we become doors and windows through which that love streams out and pours back into His own house. (cf. Seeds of Contemplation, p. 67).
Posted by Msgr. Gregory Smith at 8:29 AM No comments: 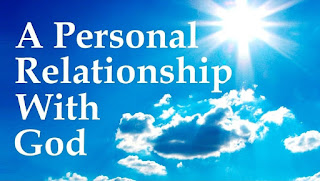 Ever since we started talking so much about the Alpha course, people are coming up to me asking what it means to have a “personal relationship” with God.

It’s a good question, since the language of relationship is somewhat new to many Catholics. And for some, even the concept seems new—though of course it isn’t.

Today’s feast of the Most Holy Trinity and the readings we’ve just heard can help us figure out what it means to have a personal relationship with God.

In fact, the first reading gives us a simple summary. First, we must do what God asks us to do, just as Moses did by climbing up Mount Sinai. And of course we must know what God expects of us. Notice that Moses has the Ten Commandments in his hands as he heads up the mountain to meet God. It’s pretty hard to be in a relationship with a parent if we don’t know what the relationship requires and never do what we’re told.

Second, we must know God by name. God tells Moses his name, Yahweh, the Lord. It’s unlikely God will reveal himself to us in a personal conversation, but throughout the Bible he tells us who he is and what he’s called.

Because knowing God by name is shorthand for knowing him. Again, this is revealed in the Scriptures. Even in this short reading from the Old Testament we learn a great deal about the Lord—he is “merciful and gracious, slow to anger, and abounding in steadfast love and faithfulness.”

In the New Testament, Jesus calls the Father “Abba” and refers to the Holy Spirit as the Paraclete—the comforter, counselor or advocate.

One of St. John Paul’s favourite teachings from Vatican II is where the Council says that we are called to live in community precisely because we’re created in the image and likeness of the Trinity. The Council speaks of “a certain similarity between the union of the divine persons and the union of God’s children in truth and love.”

This similarity indicates that human beings… “can only fully find themselves through a sincere gift of themselves.” In other words, we are only ourselves in as much as we give ourselves to others, made as we are in the image of our Trinitarian God. (Gaudium et spes, 24)

That sounds a bit complicated, but it comes down to one thing: you won’t find a relationship with Father, Son and Spirit by living with me, myself and I.

This personal relationship we’re hearing so much about is not the fruit of years of effort or some special grace. It’s God’s desire for us: “God so loved the world that he gave his only-begotten Son.” He sent the Son on a mission, with a purpose, “that everyone who believes in him… may have eternal life.”

Now what does “eternal life” mean?  Later in John’s Gospel we find it defined as a relationship, when Jesus prays these words to his Father: “And this is eternal life, that they may know you, the only true God, and Jesus Christ whom you have sent.”

A personal relationship with Jesus is neither scary nor difficult. It’s what God wills for all those who take the trouble to know him through prayer and the reading of Scripture, who work at obeying his commands and responding to his direction, and live lives of peace and order within his Body, the Church.
Posted by Msgr. Gregory Smith at 6:32 AM No comments: