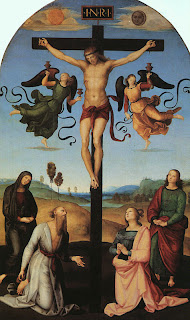 I had the most peculiar thought while reading the Passion last Sunday. In the middle of the story of the greatest evil ever done, half-way through the most terrible tragedy in human history, I found myself thinking “these folks weren’t all that bad”!

After all, almost everyone was just doing their job. The high priests were defending their religion, Pontius Pilate was being a politician, and the soldiers were doing what they were told.

Nowhere in the picture is there a Hitler, a Clifford Olson, a Paul Bernardo, or anyone really resembling the monstrous criminals of the modern age. Even Judas is more pathetic than terrible.

And yet, undeniably, the condemnation, torture and death of Jesus Christ was the greatest evil, the most awful injustice, of all time. This is clear not only from the fact that Jesus was innocence itself, killed for his very goodness, but equally from what he himself said on the eve of his passion: “This is your hour and the power of darkness.” The passion and death of the Lord was the hour when darkness reigned.

So how do we reconcile this apparent 'routineness' of the Passion with its monstrosity? What can we learn from the absence of a psychopathic villain in the story?

The famous sociologist and philosopher Hannah Arendt gives one answer. In a controversial and startling study, she concludes that much of the evil of the Holocaust was perpetrated by very ordinary people: people who were not motivated by racial hatred but by a desire to please their bosses; people who weren’t monsters but frighteningly like you and me.

The title of the book is Eichmann in Jerusalem, because it revolves around the trial of Adolf Eichmann, the so-called architect of the Holocaust. But the subtitle tells you what it’s really about: A Report on the Banality of Evil. Arendt questions whether evil is radical or simply thoughtless—the tendency of ordinary people to obey orders and conform to mass opinion without critically thinking about the results of their action or inaction.

If she is right, and I am convinced she is at least partly right, compromises and cowardice can bring about great evils. Satan does not depend on evil geniuses to accomplish his wretched purposes. To quote the famous line attributed to Edmund Burke, “All that is necessary for evil to triumph is for enough good men to do nothing.”

The idea that evil is not all that bad sounds comical when you say it, but often that’s what our actions and attitudes are saying. Pope Benedict spoke of this in a particularly direct way on the feast of the Immaculate Conception in 2005.

"…we have a lurking suspicion that a person who does not sin must really be basically boring and that something is missing from his life: the dramatic dimension of being autonomous; [we suspect] that the freedom to say no, to descend into the shadows of sin and to want to do things on one's own is part of being truly human.

Think about it for a second—don’t many of us think we need at least a little evil to be fulfilled—can’t we recognize in ourselves that “lurking suspicion” that people who don’t sin must “really be basically boring”?

The cross tells us that this is a lie. Evil brings death, not life. There’s no “good” evil. In all its forms evil cripples and wounds. Jesus died and rose to overpower evil and to free us from its power.

Pope Benedict tells us that this ‘lurking suspicion’ is a lie. Look at the world around you, he said, and see for yourself; “evil is always poisonous, [it] does not uplift human beings but degrades and humiliates them. It does not make them any the greater, purer or wealthier, but harms and belittles them.”

Christ offers us true freedom—the immense freedom of good. The cross, not self-seeking pleasures, is the path to life.

As we behold Christ crucified, let us take the true measure of the sins that led him to Calvary, and renew our desire to live holy lives under the shadow of the cross.
Posted by Msgr. Gregory Smith at 1:55 PM