Blessed John Paul, Pray for Us! 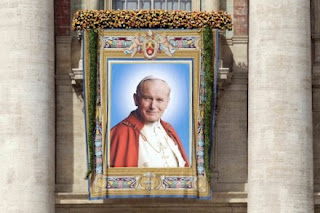 Instead of a homily on this Sunday when the Church rejoices in the beatification of Pope John Paul II, I made a few changes to an article I'd written for the Vancouver Sun just after his death and turned it into a sermon.

Follow me. These two words are the key to understanding the message of Pope John Paul II, according to his successor, Pope Benedict.

But the words don't belong to our newly-beatified Blessed John Paul. In his funeral homily, Cardinal Ratzinger pointed out that they belong to Jesus, who says "follow me" no less than eighteen times in the gospels.

Pope John Paul wasn't trying to make disciples for himself. For him, "follow me," meant only one thing: follow Christ.

Many modern celebrities cry out "look at me." John Paul proclaimed "look at Him!" Even by means of his personal charisma, the Pope directed our attention to Christ. At World Youth Day in Toronto he told young people to listen for Jesus speaking to them with "his gentle and urgent voice," just like the first disciples.

To even begin to understand the impact and appeal of Blessed John Paul, we must look at Jesus. If that sounds a bit odd or pious, it can only be because we have let Christ grow pale in our minds. Bad preaching or teaching can strip him of his compelling appeal and radical message. Pope John Paul was convinced that his chief task was to reintroduce the world—especially youth—to friendship with the real Jesus, the most attractive personality who ever lived, to the blessings that friendship with him offers and to the demands it makes.

For the late Pope, to know Christ was to know how to live and how to love, in good times and bad. It meant being loved, by God himself. Knowing Christ was like breathing the crisp air of the mountains that Karol Wojtyla loved to hike; there was nothing stuffy about it.

And of course John Paul taught without words. He forgave and embraced the man who tried to kill him, he accepted disability with good humour, and he carried on with determination and patience through pain and illness. No-one who saw the broadcast or the photo of him clutching a crucifix as he watched the Way of the Cross on his final Good Friday will ever forget the image.

Right to the moment of his noble and very public death, he was "a living gospel for all to hear," in the words of the preface from the feast of apostles.

These actions were not original: they imitated Christ, who forgave his executioners and who made his death a symbol of ultimate victory, much as the dying Pope did. Again, John Paul's wordless "follow me" meant "follow the one I am following."

I had the privilege to be in Rome for the papal funeral. Nothing in my experience begins to compare, not even the Pope's 1984 visit to Vancouver, in which I also took part. Picture what the streets look like downtown just after Rogers Arena or B.C. Place empties after a game—but then imagine the crowd doesn't stop surging by for four full days.

No-one was prepared for what happened. A young friend, a former seminarian married and living in Ireland, called me shortly after the Pope died asking where I'd recommend he stay in Rome.

"That depends," I said. "Are you coming on business or holiday?"

I really didn't get it! And if that wasn't enough, when he said something about wanting to pay his respects, I thought he meant... to me!

It wasn't long before I finally understood what was going on around me. Everyone I met had a story. A hasty flight from Medicine Hat. A fifteen-hour trip from Sicily by bus and boat—and an immediate return after filing by the Pope's body.

After nine hours in line, one young Italian said simply "how could I not say a last good-bye?"

But the big story was not fondness—it was faith. A senior Vatican bishop told how he'd met a young man the night before who pleaded to be admitted after the doors of St. Peter's had closed. The bishop explained to that it had proved impossible to accommodate everyone. Still the young fellow pleaded.

"I came here for the youth celebration during the Jubilee year 2000," he said. "I was a convinced atheist and I came to mock.

"But in the Pope's presence I was moved to think—and I found my faith."

Touched by the story, the bishop let the man into to St. Peter's through a side door. He knelt beside the Pope's body and sobbed for ten minutes.

Despite the joy we feel at today's beatification—and our hope for his eventual canonization—the lasting contribution of Blessed John Paul to the Church and to the world will not be determined by how well or how often he is remembered. It will be found in the sprouting of the seeds of faith he planted, in hearts young and old. In this sense, his work has not ended but is just beginning.

The good news that he proclaimed—messages of hope, of peace, of love, and of human dignity—did not originate with him and did not die with him. We need to respond to his enduring teachings with the courage and conviction that he himself showed.

There lies the challenge offered to us by the life and death of John Paul II: to admire or to imitate?

The challenge confronts, of course, every Catholic, and other Christians as well.

Will bishops and priests of the third millennium be formed by the example of Pope John Paul, and strive with all their energy to live the Gospel without compromise, preaching as much by what they do as by what they say?

Will each member of the Church attempt to live what we believe, even when the tide's running against us? Will we step out of the "cafeteria line" of individualistic faith, and embrace the uncompromising Catholic teaching that was the hallmark of his pontificate?

Other Christians as well, pressured to conform to the world's ways, can find strength from the example of the new Blessed. Will the legacy of Pope John Paul—whom a Protestant friend of mine called "the best Evangelical I ever knew"—encourage them to maintain unpopular positions that are faithful to the Gospel's more difficult teachings?

Already there are signs that the late Pope's willingness to carry on a humble dialogue with the members of other faiths has borne fruit. The numerous representatives of the Jewish and Moslem communities were impossible to miss in their places of honour at his funeral; will they, too, find the courage to persevere in a difficult task?

Throughout his long pontificate, John Paul II challenged all of us—Catholics, Protestants, Jews, Moslems, Sikhs, and all people of good will—to live our beliefs with greater charity, consistency and courage.

And at its end, without words, he invited all who suffer, who fear or face death, to live our trials with serenity and purpose, as he did.

John Paul II led—by following. And now may he intercede for the Church, the world, and for each one of us.

Posted by Msgr. Gregory Smith at 7:19 AM