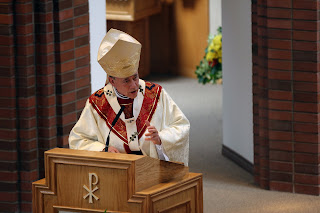 Archbishop J. Michael Miller has kindly allowed me to post the text of his homily at the Mass on the Solemnity of Corpus Christi at which we celebrated my 25th anniversary of ordination.


This evening we gather to celebrate one of the most beautiful feasts of the liturgical year, when "the Church relives the mystery of Holy Thursday in the light of the Resurrection." The solemnity of Corpus Christi or the Body and Blood of Christ reaffirms our faith in the Eucharist, the Mystery that constitutes the heart of the Church, the source of her life, the summit of her worship. Through the Eucharist we do indeed, by our sharing in the one Bread, become one body, one spirit in Christ (cf. I Cor 10:17).

Today is also an especially blessed occasion for us because we are giving thanks to the Lord for the gift of priesthood to the Church as lived by Monsignor Gregory Smith for the past twenty-five years. Twenty-five years ago, through the hands and prayer of Archbishop Carney, the Lord laid claim to young Greg Smith so that he would be his ambassador, his minister chosen to perpetuate his presence among his people. Through no doing of his own, but as sheer grace, he "possesses the ministry through God's mercy" (cf. 2 Cor 4:1). At his Ordination Father Greg was transformed by the power of the sacrament to share uniquely in the priesthood of Christ, the one, eternal High Priest, to become a "dispenser of the mysteries of God" (1 Cor 4:1).

Monsignor Greg was ordained for you, for us, for the Church: to perform a specific service for the Lord and for the People of God. The essence of this service has probably never been better expressed than by the Letter to the Hebrews, which tells us:

Every high priest is taken from among men and made their representative before God, to offer gifts and sacrifices for sin. For this reason, he is bound to offer sacrifice for his own sins as well as for those of the people. And one does not take the honour upon himself, but is called by God (Heb 5:1,3-4).

In the Rite of Ordination, the bishop gave to young Greg the following charge, indicating clearly that henceforth he was to be "above all a man of the Eucharist": "The sacrifice of Christ will be offered sacramentally in an unbloody way through your hands. Understand the meaning of what you do; put into practice what you celebrate. When you recall [celebrate] the mystery of the death and resurrection of the Lord, strive to die to sin and to walk in the new life of Christ."

The offering of the Sacrifice of the Mass draws us into the most profound mystery of God, the mystery of his redeeming love. "The Eucharist proclaims the mystery of the God who dies, who experiences human suffering and death out of love." In the Mass we are confronted with a God who reaches out to us with wounded human hands and gives us his own flesh, the Bread "for the life of the world" (Jn 6:51), so that we might abide in God and live forever (cf. Jn 6:56, 58).

Father Benedict Groeschel, a priest much admired by Monsignor Greg, once replied to the question "What does the Eucharist mean to you?" with the simple response, "It means everything." So, does it mean everything for our silver jubilarian.


At the Last Supper, on the eve of his passion, Jesus thanked and praised God and, with the power of his love, transformed the meaning of his upcoming death from defeat to victory. The fact that the Sacrament of the altar is called the "Eucharist," which comes from the Greek word meaning "thanksgiving" expresses this transformation. The change in the very substance of the bread and wine into the Body and Blood of Christ is the fruit of the gift that Christ made of himself to the Father, a gift of a love stronger than death. Because of this eternal love of Christ we can share in his eternal life. From the heart of Christ, from his "Eucharistic Prayer" on the eve of his Passion, flows the dynamism that transforms reality in all its cosmic, human and historical dimensions.

The commonly used expression "to receive Communion" is both beautiful and eloquent. It refers to the act of eating the transformed bread of the Eucharist. In fact, when we do so, we enter into communion with the very life of Jesus; we become engaged in the dynamism of his life given up for us. From God, through Jesus, to us: a unique communion is transmitted in the Holy Eucharist. We have heard as much, in this evening's second reading, from the words of the Apostle Paul to the Christians of Corinth: "The cup of blessing that we bless, is it not a sharing in the Blood of Christ? The bread that we break, is it not a sharing in the Body of Christ?"(1 Cor 10:16-17).

St. Augustine helps us to understand what happens when we receive Holy Communion. In his Confessions, he refers to a vision he had, in which Jesus said to him: "You will not change me into yourself like bodily food; but you will be changed into me." What is the Saint getting at? He means that while the bodily food is assimilated by the body and contributes to its nourishment and maintenance, the Eucharist is a different kind of bread, the "living bread that came [comes] down from heaven" (Jn 6:51). We do not assimilate it; rather, it assimilates us to itself, so that we become conformed to Jesus Christ and members of his Body, one with him, abiding in him. This is decisive: it is Christ who, in Eucharistic communion, transforms us into him. Our very self, in this encounter, is opened up; it is freed from its elusive and slavish self-centeredness and placed in the Heart of Jesus, who in turn is himself immersed in the communion of the Triune God.

The Eucharist unites us intimately to Christ and, at the same time, it opens us to others, making us members one of another: divisions are overcome as we are one with him. Eucharistic communion unites me to the person next to me, and with whom I might not even have a good relationship, but also to my brothers and sisters wherever they may be, in whatever corner of the world. As Pope Benedict wrote in his first encyclical, "union with Christ is also union with all those to whom he gives himself. I cannot possess Christ just for myself; I can belong to him only in union with all those who have become, or who will become, his own."

Those who recognize and accept Jesus in the Eucharist recognize and accept their brothers and sisters who suffer, who are hungry and thirsty, who are strangers, naked, sick, imprisoned (cf. Mt 25:31-46). They are attentive to every person, committing themselves, in a concrete way, to those who are in need. From the gift of Christ's love in the Eucharist comes our special responsibility as Christians in building a just and fraternal society, a culture of life and a civilization of love.

The Eucharist is an urgent call to holiness in the midst of everyday life. That call contains within it a call to action. It bids us who adore and receive the Lord to make a similar gift of self to our brothers and sisters. Together with Jesus, we are called "to be bread broken for the life of the world" – to nourish others as we have been nourished.


The Lord does not leave us alone on our journey through this world. He is with us, just as he said: "Those who eat my flesh and drink my blood abide in me, and I in him" (Jn 6:56).

At this announcement, however, the people, instead of rejoicing, started to murmur in protest: "How can this man give us his flesh to eat?" (Jn 6:52) – a question repeated endlessly in the course of history. This seemed to them a hard saying, and many of his disciples withdrew from Jesus' company when they heard it. "Then, as now, the Eucharist remains a 'sign of contradiction' . . . because a God who makes himself flesh and sacrifices himself for the life of the world throws human wisdom into crisis."

Commenting on the wonder of this amazing gift, and why it caused such consternation among those who heard it, the Holy Father has said that perhaps the reason is our fear of a God who is so close to us. Listen to his words:

One might say that basically people do not want to have God so close, to be so easily within reach or to share so deeply in the events of their daily life. Rather, people want him to be great and, in brief, we also often want him to be a little distant from us.

But God wants to be close to us. He wants his presence with us to continue through time and space; and so he gave us the Holy Eucharist and the priesthood to perpetuate his presence.


As we continue this Mass, let us pray that we will allow ourselves to be taken into the Mystery of the Eucharist, the treasure of the Church where Christ "abides" with us (cf. Jn 6:56), and let us renew our gratitude for the gift of the priesthood through which the Lord continues to embrace the world which he loved so much that he sent his Son to redeem it (cf. Jn 3:16).