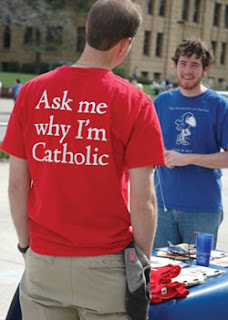 “Anonymous Christians.” These were the two most exciting words I heard in my high school religion class. Fresh from the pen of the German theologian Karl Rahner, they summarized his theory that those who followed their conscience would be saved by Christ much like Christians are saved, even if they did not know or even refused to accept the Lord.

It was a long way from what we had heard about such folks in grade school.  At best, they were on their way to “limbo,” a rather pale imitation of heaven for the non-baptized.

The theory of the anonymous Christian did some good things. It helped make us more respectful of people with other faiths or none, and more aware of the mystery of God’s saving will. But along the way it did significant damage to the Church’s missionary identity.

The theologian and evangelist Ralph Martin has concluded that the theory has “greatly weakened the impetus to evangelization” in the Church.   In a brand new book called Will Many Be Saved? What Vatican II Teaches and Its Implications for the New Evangelization, Dr. Martin writes that “It is very easy to get the impression from Rahner’s essays on the topic that almost everyone, if not everyone, is already in a saving relationship with Christ.”  All that remains is to “enrich” or “improve” such a person’s life.

By now those of you have never heard of Karl Rahner are sitting back comfortably, thinking this homily has nothing to say to you. Alas, that’s not true. Whether you’ve heard of him or not, whether you’ve ever thought about anonymous Christianity or not, it’s almost certain you’ve signed on to the rosy view of nearly-universal salvation that is so much a part of present-day thinking.

I can say that with authority, since I spent many years thinking like that myself. But Ralph Martin, responding to the Church’s authentic teaching and particularly the teaching of Blessed John Paul, has been sounding the alarm for quite a while now, and he has managed to wake me up.

“There is certainly a widespread impression among many Catholics today that virtually everybody will end up in heaven, with possibly a few, truly awful exceptions going to hell. … If I were to describe the prevailing world view among most Catholics in North America, Europe and Oceania today, I would describe it like this: ‘Broad and wide is the road that leads to salvation and almost everyone is travelling that way. Narrow is the road that leads to hell and hardly anyone is travelling that road. … The unfortunate thing is that it is exactly the opposite of what Jesus indicated is the truth about our situation.” (In The New Evangelization: Overcoming the Obstacles,  27)

Let’s be honest with ourselves. Isn’t this the way most of us think?

And I’ll be honest with you: it’s not the way a Catholic should think.  Consider these words of Pope John Paul: “If we go back to the beginnings of the Church, we find a clear affirmation that Christ is the one Saviour of all, the only one able to reveal God and lead to God.”

The Pope then quotes the words of St. Peter: “there is salvation in no one else, for there is no name under heaven given among men by which we must be saved.” He adds “This statement, which was made to the Sanhedrin, has a universal value, since for all people—Jews and Gentiles alike—salvation can only come from Jesus Christ.”

Before I spell out what this means for all of us, I need to pause to mention what it doesn’t mean. It doesn’t mean non-Christians are going to hell! The Catechism states that the Holy Spirit offers the possibility of salvation to all, in a way known to God.  Everyone who is ignorant of the Gospel, “but seeks the truth and does the will of God in accordance with his understanding of it, can be saved. It may be supposed that such persons would have desired Baptism explicitly if they had known its necessity.”

Nonetheless, even those who do not know him are saved by Christ, not by their own virtue.

Which brings us to the question: Why should we evangelize? Why not just let people alone with their conscience and whatever understanding of God they already have?

For one thing, we should note that the Catechism speaks of the salvation of the unbaptized "in a way known to God," whereas the salvation promised through Baptism and repentance has been made known to us by Christ.

Another new book also provides a clear answer. André Regnier, the co-founder of Catholic Christian Outreach, has just published Catholic Missionary Identity, reflecting on what has driven him for the past quarter-century as a lay missionary on university campuses.

The book concludes very simply that we must evangelize because Jesus told us to evangelize. “To be Catholic is to be missionary—to be willing to reach out to others and share with them the Good News of salvation.”

I know André Regnier very well, and when we’re ready for it I’ll ask him to speak in the parish. I say “when we’re ready,” since he doesn’t mince words. He writes very bluntly in the new book: “Unfortunately, for many Catholics, parish life does not inspire missionary activity. Apart from the relatively small group of people who are active within the community, the majority of the baptized are bored, uninspired, or uncommitted to parish life.”

He gets even more specific, adding “most parishes and their parishioners do not see themselves as instrumental in bringing back those who have walked away from the faith.”

I’m not going to get defensive and argue with André about the situation in our parish. Society is in crisis, and this is no time for back-patting. Although we have been blessed at Christ the Redeemer by the evangelizing zeal of some truly dedicated parishioners, we won’t be a fully missionary parish until every one of us thinks and acts like a missionary.

We are on the eve of the Year of Faith that Pope Benedict has offered to the Church as a fresh opportunity for “renewed enthusiasm of the encounter with Christ.” Announcing the Year of Faith, the Holy Father quoted his homily at the Mass marking the beginning of his pontificate where he said that the whole Church “must set out to lead people out of the desert, towards the place of life, towards friendship with the Son of God, towards the One who gives us life, and life in abundance.”

We are also on the eve of the Catholics Come Home initiative in our own Archdiocese, where the entire local Church community will work together to invite Catholics back to Mass by a number of ways, including television ads and a warm welcome in the parish.
And in our parish, we are just a week away from the two most important missionary moments in our own annual calendar: the first of these are evenings for those interested in learning more about the Church. They begin a week from Tuesday. These inquiry sessions will lead to the Rite of Christian Initiation for those ready to join the Church.

The second missionary moment in the parish is the Alpha Course, which begins a week from tomorrow. Alpha is a basic introduction to Christianity; it doesn’t presuppose anything. Some folks come just to argue, but many hearts are changed by the witty videos and the non-judgmental discussion that follows.

It should be obvious that most of the folks who should be at RCIA or Alpha next week are not in church this morning! So there’s only one way we won’t be cooking for empty tables or talking to empty chairs: and that is if you think like a missionary and ask family members and friends to participate—which usually means coming along with those you invited, at least until they’re comfortable.

But we won’t think like missionaries unless we first think like disciples—unless we recognize with true joy that Christ has saved us. Today’s readings are a wonderful opportunity to think about that: they don’t say much to the anonymous Christian, but they speak with great power to those who have experienced the grace of salvation: water has been poured into the wilderness of our hearts, refreshing the desert of our weary spirits.

Each one of us has had our eyes and ears opened to the truth—the truth about ourselves, and the truth about God’s merciful love. As the opening prayer for today's Mass says, we know that we are beloved sons and daughters, offered true freedom and an everlasting inheritance.

These aren’t poetic words but the facts of our salvation in Christ. If we believe them, how can we not share them?

Through the prophet Isaiah, the Lord commands us “Say to those who are of a fearful heart, ‘Be strong, do not fear! Here is your God. … He will come and save you.’”

These are probably not the words to use with your brother-in-law or next-door neighbour!  You can probably find a somewhat softer approach.

Will you do it?

I leave you with one thought based on today’s Gospel. Imagine a family member or friend whose vision or hearing was seriously impaired. What if you knew something that would give them the gift of sight or allow them to hear? Would you keep it secret?

Jesus has laid his healing hands on each one of us. Let us now help others to experience that saving touch.

Posted by Msgr. Gregory Smith at 8:12 AM