Fear Activates Our Faults (20.A) 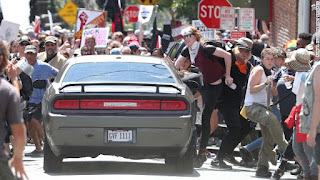 Father Emmerich Vogt, the Dominican preacher who visited our parish a few years ago often says “Fear is the chief activator of our faults.”

Although some people think St. Teresa of Avila may have said it first, the line also appears in the wise writings of Alcoholics Anonymous. But wherever it comes from, the idea that fear triggers our defects is undoubtedly true.

Of course not all fear is destructive. Right now the world is gripped by fear of terrorism, particularly the kind that’s linked to Islamic extremism. Given the dreadful events in Spain last week, and in many other places in the past few years, it is an understandable and a reasonable fear.

But fear can be unreasonable. We can lash out without thinking, we can label people without cause, and we can overreact in ways contrary to the Gospel. Here in Canada, where we have seen little Islamic extremism and even less terrorism, we can rush to abandon the openness that is one of the most admirable aspects of our country.

At the very least, we let fear shut down an intelligent conversation about immigration, security, and interfaith relationships. Fear of what—or whom—we don’t know can lead to an unwelcoming attitude to those who are new to the country, or different from ourselves. We can make others feel unwelcome.

Things weren't much different in our Lord's time.  The Jewish people had a deep sense of their uniqueness, while those around them were distrustful and sometimes hostile.

That's the background to the encounter between the Lord and the Canaanite woman.  At first glance, we're a bit puzzled, because Jesus seems, quite frankly, a bit rude.  In fact, the curious dialogue can be explained precisely by Jesus' desire to draw attention to the barrier between Jew and Gentile; he could not pretend the barrier did not exist: it would exist until he reconciled Jew and Gentile on the cross.

At the same time, this puzzling passage teaches us something about overcoming prejudice and getting along with those of different cultures.  The woman could easily have taken offense at the response Jesus gives her.  His answer was not nearly as offensive then as it sounds now, but it was certainly open to being misunderstood.
But instead of stomping off, the woman persists and engages Jesus in a sort of repartee.  She meets him within the framework of his culture, of his own understanding of his mission.  And the meeting proves very fruitful indeed.

We can find two important lessons in this story.

The first lesson helps us relate to other people: When we’re put off by someone's manner or choice of words, we might well remember the example of the Canaanite woman, and ask ourselves whether we may just need to try a little harder to understand where the person is coming from.  We should avoid judging every encounter by the particular culture in which we've grown up, or by our own personal standards.

The second lesson helps us relate to God:  When God's reply to our prayers seems harsh or puzzling, we may need to imitate the Canaanite woman in her faith and persistence.  Sometimes God’s purposes require that he make a point with us in the same way Jesus had to make a point with the woman.  We may feel he has dismissed us, or not taken our prayer seriously.

We may even wonder whether we are beyond God’s concern, outside of his circle of compassion.

But today’s first reading proclaims God’s “open door” immigration policy.  The “foreigners who join themselves to the Lord”, who love the name of the Lord, he will bring to his holy mountain, he will make “joyful in his house of prayer.”

There are no outsiders in God’s eyes, no strangers.  God excludes no-one from his plan of salvation, except for those who exclude themselves.

Some people feel like outsiders in the Church. Many years ago a non-Catholic friend of my parents, who was married to a Catholic and had attended Mass for years, was talking to a priest, who asked why he’d never joined the Church.  “No-one ever asked,” he said.  Today, God asks; God promises to lead all who come to him up the mountain of his love.

Today’s Gospel, even if it is a bit odd, brings home the point that Jesus came for everyone—insider, outsider, neighbour, stranger, saint, sinner, you name it.  All we need is the confidence of that Canaanite woman.  If we can just ask for scraps, we’ll get an invitation to sit down at the table.

What a difference God’s promise can make to how we see ourselves in relation to Him—and to how we treat others, knowing they too share also in his glorious plan for all humanity.

A note: Part of the homily is taken from notes on the readings that I wrote down in 2008--before I had a blog and so before I bothered to write down sources--so there may be unattributed material here!

Posted by Msgr. Gregory Smith at 6:58 AM