Non-homily for Palm Sunday (B) 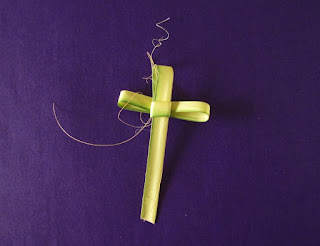 I started to write a homily for Palm Sunday, but decided to take a different approach and ended up preaching without notes. But for those looking for some thoughts on yesterday's liturgy, I'm posting the homily I didn't deliver!

For many years I’ve heard the expression “we are Easter people and alleluia is our song.” And it annoyed me every time I heard it.  For some reason, it sounded like an advertising slogan or jingle.

But since the phrase came to my mind in connection with today’s homily, I decided to Google it and find out where it came from. I’m more than a little embarrassed to say that the first hit was St John Paul II – and even more embarrassed to admit that the second hit was St Augustine in the fifth century.

I guess there’s no accounting for tastes, and mine obviously aren’t that good.

But let me tell you why I was thinking about the phrase on Palm Sunday –  the Sunday when we read the account of the Lord's passion and think more about his suffering and death and than his resurrection.

Last week I opened for the first time a book that I bought, used, about 25 years ago.  It’s called The Resurrection: A Biblical Study, and it was written more than 50 years ago. The reason I turned to such a venerable volume was that there are very few books, even now, about the resurrection of Jesus – certainly far more has been written about his suffering and death.

Partly because of the influence of his book, I don’t think that this idea is widespread among theologians anymore. But among ordinary Catholics like ourselves, it’s certainly a risk – which is why I was using a book about Easter while writing my homily for Passion Sunday.

I wanted to see if Father Durrwell would connect today's readings to the resurrection; and I was not disappointed. Actually, he doesn’t make the connection – he points out that Saint Paul does, in the second reading (Phil 2:6-11).

Here’s what he said “The Epistle to the Philippians, which gives the best account of the humiliations of the Son of God in the flesh, gives a parallel account of their repercussions in glory.”

The parallel is clear in the text we’ve just heard. The first two verses show how Christ’s humility and obedience lead him to the cross. But the next three verses– connected to the first by the word “therefore” – state that God has exalted Christ, making him the sovereign ruler of heaven, earth, and even the underworld.

We modern people have to struggle to get the full power of Paul’s description of Christ and glory. We have no great respect for rulers, and wouldn’t even think of genuflecting before them or bowing at their name. Paul, on the other hand, it’s writing at a time of absolute rulers who demanded absolute submission.

“The man who excepted humiliation of his own free will, is established at the very summit of creation, in the power and glory of God,” writes Durrwell.

Thus do we need to connect the painful story of the passion with the glorious exaltation of Jesus that completes the story for all time.