What was most precious in Notre Dame? (Holy Thursday C) 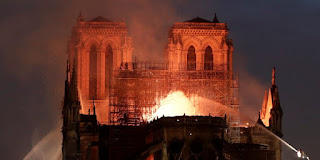 As the flames licked through the roof of Notre Dame on Monday, firemen and others formed a human chain to rescue precious relics and other treasures of the ancient cathedral.

Most valuable of them all, in more ways than one, was the Crown of Thorns, said to have been worn by our Lord during his Passion.

Obviously, this relic is precious first and foremost because of its association with the suffering of Jesus. The Crown of Thorns was placed on Christ’s head in ridicule but became a symbol of his nobility and triumph.

But there is a more worldly reason why saving this relic was an obvious priority for those rescuing the priceless contents of the cathedral. Although a sacred relic, properly speaking, cannot be bought, the Crown of Thorns cost Louis IX, now known as St. Louis of France, what might now be called a king’s ransom – more than his own weight in gold. 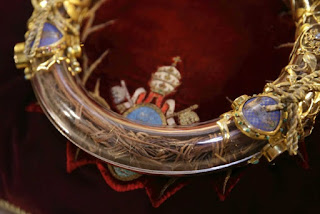 The relic had been pawned as collateral for a massive loan to the Latin emperor of Constantinople, who was eager for closer ties to France. So, King Louis paid off the loan and took ownership of the Crown of Thorns.

I’m telling you this story to show that nothing movable in the great cathedral had greater religious, historic, or even monetary value. Nothing, that is, other than a metal container filled with flat wafers of unleavened bread.

Not bread, of course. Consecrated Hosts, kept in a tabernacle for distribution at Mass and to the sick. Those Hosts, the Body of Christ under the appearance of bread, dwarfed everything and anything else that could be found inside Notre Dame.

The fire department chaplain, Father Jean-Marc Fournier, is heralded as a hero for his role in removing the sacred Hosts from the burning church. The newspaper says that his glasses even reflected the orange flames.

In the middle of flames and falling debris, he took the time to lift high the Eucharistic Presence and bless the burning church with it, praying that the Lord might help those seeking to save God’s house.

The story stirs the hearts of believers and may well even inspire some unbelievers. For me, however, it’s not really surprising, and it’s not really new. Father Raymond de Souza tells a similar story in yesterday’s National Post, though I have to tell you, I already knew it and intended to share it tonight before he beat me to it!*

It’s the story of the Lieutenant Governor of Quebec, Paul Comtois. When his official residence caught fire, he did the same thing as Father Fournier. Since there was a chapel in the mansion, after making sure his family was safe, he returned to the building to remove the Eucharist.

“He made it to the tabernacle and removed the Blessed Sacrament, but died as he left the upper floor, the stairway collapsing around him.”

Father de Souza calls him “a martyr for the Eucharist”.

I’m sure there are many who’d call him a fool. But they don’t believe what we are celebrating tonight, namely, that “the Lord Jesus, on the night he was betrayed took a loaf of bread, and when he had given thanks, he broke it, and said, ‘this is my Body, that is for you. Do this in remembrance of me.’”

We are here because we believe what Jesus said when he told his disciples “my flesh is true food and my blood is true drink”. And we hold fast to his promise that “whoever eats of this bread will live forever”.

We, for whom these truths are central to our faith, and to our very being, understand well the heroism of Father Fournier and the Honourable Paul Comtois.

The Eucharist calls us to action. Receiving Holy Communion is not a passive thing, like taking medicine. Rather, we enter into a communion of charity not only with God, but also with our brothers and sisters – not only those with whom we gather at Mass, but all those who need our love and care.

Given all the wonders the Eucharist contains, and the rich accounts of the Last Supper in the Gospels of Matthew, Mark, and Luke, I marvel every Holy Thursday that the Church chooses to read St. John’s version of the story. No bread. No wine. The only detail is the washing of feet and the lesson of charity, forever connected to the Lord’s gift of himself in the Eucharist.

Rarely do we find ourselves called to wash one another’s feet. But just about every day we’re called to acts of service that we find irksome, or to put up patiently with people it would be easy to dismiss or reject.

No doubt the people who built the Cathedral of Our Lady of Paris had many motives. But at the top of the list was surely the belief that what happened inside more than deserved the majestic beauty its architects achieved.

We live in a different age. But we too are called to build a temple in which the Lord can dwell and be glorified. We build it with the same faith as medieval Christians, but instead of stone, mortar, and marble, we build it with charity – with our care for the poor, the sick, the dying, the disagreeable.

And all because we believe.

On this sacred night, we celebrate what we believe, and recommit ourselves to the great construction project of Jesus, in whom we are being built together spiritually into a dwelling place for God (cf. Ephesians 2:22).

*A footnote: Father de Souza also tells the story of the 1823 fire at St. Paul's Outside the Walls - I lived across the street from the basilica during my years as a seminarian. That, too, was a story to which he beat me! If he wasn't so much smarter than I, I would risk the old line about "great minds thinking alike"...