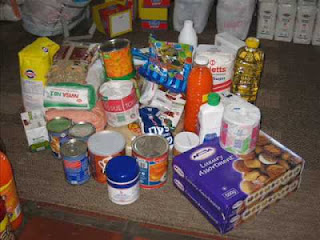 I’m sorry, but you missed the homily—at least the best part of it.

As the old saying goes, “a picture is worth a thousand words,” and the rows of bags and boxes that filled every inch of available space in our hallways preached a sermon about Christian care for our brothers and sisters this Christmas.

I’ve never seen such an outpouring of generosity in any parish, although I’m told our Christmas miracle is repeated in many churches, Catholic and otherwise. And of course your generosity didn’t just donate groceries: there was a lot of hard work involved in sorting and delivering them. Members of the St. Vincent de Paul Society spent more time at church this week than I did!

The sight of the Christmas hampers made me grateful for the Christian commitment and charity of our parishioners, particularly the tireless workers from our parish St. Vincent de Paul Society. But at the same time, they reminded me that the Church does something important when it invites other members of the local community to join us in reaching out to those who need support at Christmas.

It’s likely that the folks at Whole Foods who donated enormous amounts of food and those at Safeway, who provided fifty bags of groceries, include people of different faiths or none. Yet they responded to the spirit of the season in partnership with us, and surely will themselves be blessed for sharing this initiative with us.* The Church’s mission is not only to help those in need but to help people know that they need to help.

No finer example of this exists than Mary’s visit to her pregnant cousin. Pregnant herself, Mary knows what it must mean to the much-older Elizabeth. 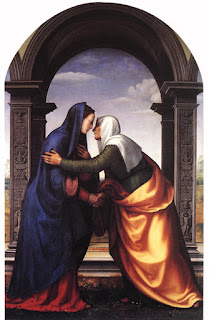 While this first meeting between the coming Lord and his future herald has rich meaning for us, today I’ll just emphasize the fact that charity was at the heart of the encounter between Mary and Elizabeth.

Moved by the same Holy Spirit who prompted Mary to make such an arduous trip, we share the call to do good in response to the gift that Christ is to each of us at Christmas

But let’s never forget that ‘man does not live on bread alone.’ We must offer the world more than food for the body: every hamper that went out was a message of God’s love for the recipient.

Even more specifically, we want to share with everyone around us the hope that Elizabeth shared with Mary: blessed are those who believe that God’s promises will be fulfilled.

The current Catholics Come Home campaign is a most effective way of sharing that message. Let’s not wait for the so-called “poinsettia and lily” Catholics to show up on Christmas—let’s invite them and make them welcome.

Ask the Holy Spirit to show you whom to call today with an invitation to Mass on Tuesday.

On a practical note, I can tell you who you should probably invite first: the family members who have no particular gripe against the Church, but who just got out of the habit of coming to Mass. I was fascinated by a magazine article that explained how Barack Obama was reelected president despite very low approval ratings and much opposition. The campaign, it would seem, didn’t try to change anybody’s mind about him or his policies. Instead, the strategy was to get the people who weren’t against the president to get out and vote.

The St. Vincent de Paul volunteers prepared in total 151 hampers.  We received groceries from our own parishioners and students from St Anthony's, St Pius X and Holy Trinity schools.  Safeway Supermarkets donated 50 bags of groceries whileWhole Foods donated a significant amount of foodstuffs (over 1200 pieces alone).  In total there was close to 7,000 kilos of groceries donated in total.

Hampers were distributed to 9 individuals, whose names we received through the office; and through various parishes (on the North Shore: St Paul's, 20 hampers; St Stephen's, 20 Hampers; Vancouver: Sts Peter & Paul, 20 hampers; St Pat's, 32 hampers; Directions Youth Centre, 5 hampers; Sancta Maria House, 9 hampers.  Forty hampers, with Iraqi-specific food items, were prepared and given to Our Lady of Good Counsel parish in Surrey for the Iraqi refugee community there.  Some of the monies donated were used to purchase bulk foods for the Iraqi refugees (rice, sugar, lentils, chick peas).  In addition to the 40 hampers we also brought out a further 200 lbs of chick peas, 40 kilos rice, 48 litres olive oil, 48 kilos flour and some gently used children's winter coats). The SSVP there along with the Iraqis will be able to distribute this as needed. $500 in gift coupons were given to Sacred Heart parish downtown and another $100 to a CTR parishioner.

We had well over 50 volunteers helping to prepare and a further dozen to deliver the hampers.

Posted by Msgr. Gregory Smith at 6:18 AM