This morning I repeated some of what I'd said in my homily at midnight--on the assumption that folks who attended that Mass weren't likely to be in church again at 9 a.m. But I changed the introduction, which I offer below. 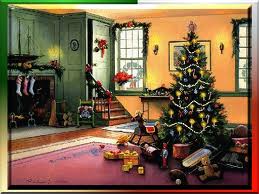 Christmas mornings are my happiest childhood memories—though I’m not sure my parents enjoyed them as much as I did. They’d often be up into the wee hours assembling and wrapping presents, which was impossible to do so while the five kids were awake, but then they’d find us at the foot of their bed at six a.m., raring to go.

Although we were always keen to see what Santa had left us, we knew better than to go downstairs on our own. Every year, my Dad would put on his housecoat and go ahead to turn on the lights on the Christmas tree before we arrived in the living room.

I remembered all this at 7:30 this morning, as I donned my warmest bathrobe and slippers and ran across the parking lot to open the church. I wanted to sleep for every possible minute of the five hours between the midnight Mass and this one so I was prepared risk getting caught in that undignified get-up.

As I raced up the steps, words on the banner hanging outside caught my eye: “we are family.”  And all of a sudden, I thought to myself: “yes, we are.” Yes, by any definition and any measure, our community at Christ the Redeemer is a family—it’s not a slogan.

The same thing struck me at Midnight Mass last night. We begin with a procession to the crib, and traditionally the Baby Jesus is carried by a youngster. But by 11:30 there was no sign of a child the right age. The next thing you know, these two tall servers began to move through the crowd like a pair of Mounties looking for an escaped criminal.

Like the Mounties, they got their man—more precisely, a little girl. She came quietly, to be sure, but I wondered how she’d manage separated from her parents as we waited for Mass. I needn’t have worried: one of her captors sat beside her right up until Mass, and her face just shone as he paid her his full attention.

The kind altar server was just one of dozens of parishioners who gave their time and talents so that our Midnight Mass would be everything a Christmas liturgy ought to be. And, like his parents in the choir loft, he’s back on duty six and a half hours after he went home.

It’s no idle boast: we are family.  And so we mean it when we say 'welcome home!'

Last night at midnight we visited Bethlehem. But it was at Jerusalem that Christ completed the mission for which He was born. Our salvation dawned at Bethlehem, where the goodness and loving kindness of God our Saviour appeared. But he saved us at Jerusalem, not because of any works or righteousness that we had done, but according to his mercy.

Isn’t that typical of a family? We belong because we belong, not because we somehow deserve it.

As the poet Robert Frost wrote,

Home is the place where, when you have to go there,
They have to take you in.
I should have called it
Something you somehow haven't to deserve.
Posted by Msgr. Gregory Smith at 2:09 PM