What Christ Wants from His Church 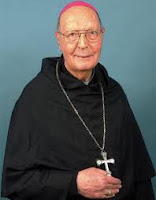 Chiesa, the English-language website of the prominent Vatican observer Sandro Magister, has published an unofficial translation of Cardinal Prosper Grech's meditation at the beginning of the Conclave that elected Pope Francis.  In the following excerpts, the elderly scholar is "drawing from Scripture some reflections to help us understand what Christ wants from his Church...."

These exhortations to the Cardinals seem appropriate and extremely valuable for every Catholic and so I am reprinting them here.

After his resurrection Jesus sent the apostles into the whole world to make disciples of all peoples and baptize them in the name of the Father, and of the Son, and of the Holy Spirit (Mt 29:19). The Church does this by presenting the Gospel without compromise, without diluting the word. […] When one descends to compromises with the Gospel one empties it of its “dynamis,” as if one were to remove the explosive from a hand grenade. Nor must one give in to temptation thinking that, since Vatican Council II is believed to have leveled out salvation for those who are outside of the Church as well, the need for baptism has been relativized. Today is added the abuse of many indifferent Catholics who neglect or refuse to baptize their children.

THE SCANDAL OF THE CROSS

The proclamation of the Gospel of the Kingdom of God is made concrete in the proclamation of “Jesus Christ, and him crucified” (1 Cor 2:2). […] It is precisely this scandal of the cross that humbles the “hubris" of the human mind and elevates it to accept a wisdom that comes from above. In this case as well, to relativize the person of Christ by placing him alongside other “saviors” means emptying Christianity itself of its substance. It is precisely the preaching of the absurdity of the cross that in less than three hundred years reduced to the minimum the religions of the Roman empire and opened the minds of men to a new view of hope and resurrection. It is for the same hope that the modern world is thirsting, suffering from an existential depression.

Christ crucified is intimately connected to the Church crucified. It is the Church of the martyrs, from those of the first centuries to the many faithful who, in certain countries, are exposing themselves to death simply by going to Sunday Mass. […] Jesus predicts: “if they have persecuted me, they will persecute you" (Jn 15:20). Therefore, persecution is a "quid constitutivum" of the Church, […] it is a cross that it must embrace. But persecution is not always physical, there is also the persecution of falsehood: “Blessed are you when they insult you and persecute you, and say all manner of evil against you falsely for my sake" (Mt 5:11). You have recently experienced this through some media outlets that do not love the Church. When the accusations are false one must not pay attention to them, even if they cause immense pain.

WHEN THE ACCUSATIONS TELL THE TRUTH

It is another thing when what is said about us is the truth, as has happened in many of the accusations of pedophilia. Then we must humble ourselves before God and men, and seek to uproot the evil at all costs, as did, to his great regret, Benedict XVI. And only in this way can we regain credibility before the world and give an example of sincerity. Today many people do not arrive at believing in Christ because his face is obscured or hidden behind an institution that lacks transparency. But if recently we have wept over many unpleasant events that have befallen clergy and laity, even in the pontifical household, we must consider that these evils, as great as they may be, if compared with certain evils in the history of the Church are nothing but a cold. And just as these have been overcome with God's help, so also the present crisis will be overcome. Even a cold needs to be taken care of well to keep it from turning into pneumonia.

SMOKE OF SATAN IN THE CHURCH

The evil spirit of the world, the “mysterium iniquitatis" (2 Thes 2:7), constantly strives to infiltrate the Church. Moreover, let us not forget the warning of the prophets of ancient Israel not to seek alliances with Babylon or with Egypt, but to follow a pure policy "ex fide" trusting solely in God (cf. Is 30:1; 31:1-3; Hos 12:2) and in his covenant. Courage! Christ relieves our minds when he exclaims: "Have trust, I have overcome the world" (Jn 16:33). […]

No less easy for the future pontiff will be the task of keeping unity in the Catholic Church itself. Between ultratraditionalist extremists and ultraprogressive extremists, between priests who rebel against obedience and those who do not recognize the signs of the times, there will always be the danger of minor schisms that not only damage the Church but also go against the will of God: unity at all costs. Butt unity does not mean uniformity. It is evident that this does not close the doors to the intra-ecclesial discussion present in the whole history of the Church. All are free to express their thoughts on the task of the Church, but they should be proposals in line with that "depositum fidei" which the pontiff together with all of the bishops has the task of guarding. […]

Unfortunately today theology suffers from the feeble thought that dominates the philosophical environment, and we need a good philosophical foundation in order to be able to develop dogma with a valid hermeneutic that speaks a language intelligible to the contemporary world. It often happens, however, that the proposals of many faithful for the progress of the Church are based on the level of freedom that is granted in the area of sexuality. Certainly laws and traditions that are purely ecclesiastical can be changed, but not every change means progress, it must be discerned whether such changes act to increase the holiness of the Church or to obscure it. […]

THAT LITTLE REMNANT WHICH DOES NOT BEND THE KNEE TO BAAL

In the West, at least in Europe, Christianity itself is in crisis. […] There reigns an ignorance and disregard not only of Catholic doctrine, but even of the ABC's of Christianity. The urgency is thus felt of a new evangelization that begins from pure kerygma and plain proclamation to nonbelievers, followed by a continual catechesis nourished by prayer. But the Lord is never defeated by human negligence and it seems that, while they are closing the doors to him in Europe, he is opening them elsewhere, especially in Asia. And even in the West God will not fail to keep for himself a remnant of Israel that does not bend the knee before Baal, a remnant that we find mainly in the many lay movements endowed with different charisms that are making a strong contribution to the new evangelization. […] Care must be taken, however, that particular movements should not believe that the Church is exhausted in them. In short, God cannot be defeated by our indifference. The Church is his, the gates of hell can wound its heel but can never suffocate it. […]

THE FAITH OF THE SIMPLE

There is another factor of hope in the Church that we must not overlook, the “sensus fidelium.” Augustine calls it "the inner teacher" in each believer. […] This creates in the depths of the heart that criterion of discernment of true and false, it makes us distinguish instinctively that which is "secundum Deum" from that which comes from the world and from the evil one (1 Jn 4:1-6). […] The coals of devout faith are kept alive by millions of simple faithful who are far from being called theologians but who in the intimacy of their prayers, reflections, and devotions can give profound advice to their pastors. It is these who "will destroy the wisdom of the wise and nullify the intelligence of the intelligent" (1 Cor 1:19). This means that when the world, with all of its knowledge and intelligence, abandons the logos of human reason, the Logos of God shines in simple hearts, which form the marrow from which the backbone of the Church is nourished. […]

UNDER THE HAND OF CHRIST THE JUDGE

While professing that the Holy Spirit is the soul of the Church, we do not always take him into consideration in our plans for the Church. He transcends all sociological analysis and historical prediction. He surpasses the scandals, the internal politics, the ambition, and the social problems, which in their complexity obscure the face of Christ that must shine even through dense clouds. Let's listen to Augustine: "The apostles saw Christ and believed in the Church that they did not see; we see the Church and must believe in Christ whom we do not see. By holding fast to what we see, we will arrive at seeing the one whom now we do not see" (Sermo 328, 3). […] In 1961 John XXIII received in audience in this Sistine Chapel the diplomatic corps accredited to the Holy See. He indicated the dominant figure of Christ the judge in the fresco of Michelangelo, and told them that Christ will also judge the actions of the individual nations in history. You find yourselves in this same Chapel, beneath the figure of that Christ with his hand raised not to crush but to illuminate your voting, that it may be "secundum Spiritum," not "secundum carnem." […] It is in this way that the elected will be not yours, but essentially His. […]