A dream, not a complaint (Advent 2) 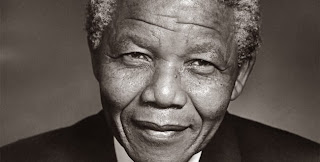 Nelson Mandela had a vision for South Africa free of the discrimination that had splintered his country during 46 years of racial segregation. In his first speech as president, he called on South Africans to “reinforce humanity's belief in justice, strengthen its confidence in the nobility of the human soul and sustain all our hopes for a glorious life for all.”

Martin Luther King also had a vision—a vision of justice in the United States of America. Almost thirty years before Nelson Mandela’s inauguration, he stood on the steps of the Lincoln Memorial and proclaimed: "I have a dream." 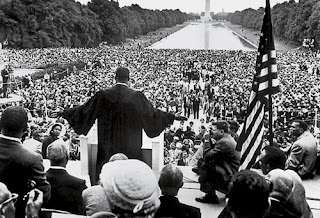 “I have a dream that my four little children will one day live in a nation where they will not be judged by the colour of their skin but by the content of their character.”

Ten times, in fact, Dr. King spoke of his dream for America. In his speech, President Mandela spoke of the dreams of the heroes and heroines who had suffered and sacrificed for freedom.

While I was in Toronto last week, just before Nelson Mandela’s death, I had the chance to hear a talk from Father Tom Rosica, the head of Salt+Light TV, our national Catholic television channel.

Father Rosica made a powerful point about the famous “I Have a Dream” speech of Martin Luther King:

He didn’t stand up and say “I have a complaint!” Though that would have been fair enough, since there was still plenty to complain about for black Americans in 1964.

The same is true of President Mandela’s inaugural address. He could have used it to condemn the architects of a great injustice; it could have been a litany of complaints from start to finish. Instead, he spoke of building a “society in which all South Africans, both black and white, will be able to walk tall, without any fear in their hearts, assured of their inalienable right to human dignity—a rainbow nation at peace with itself and the world.”

“I have a complaint” never moves hearts. Only dreams do. As Father Rosica said, “Saying what is wrong will never be enough to change the world. Nor will it change the Church. One has to lift up a vision of what is right, what is good, what is beautiful, what is holy and what it true. That is what brings about change and conversion.”

The Church knows this very well, and Pope Francis has reminded us several times that our preaching must begin with the joyful vision of the Gospel, not a focus on human weakness and shortcomings.

In particular, our Advent liturgy shows the importance of beginning with a dream. Each Sunday in Advent, the first reading is a prophecy pointing to the coming of a glorious Kingdom. Last week, Isaiah shared a vision of nations streaming to the mountain of the Lord’s House, eager to know his ways and beating their weapons into farm tools along the way.

Today we read the prophet’s vision of the wolf lying down with the lamb, the calf and the lion, with a child playing safely with a poisonous snake. It’s a dream of a Kingdom of peace and safety, with a righteous Leader like none other.

Next week, Isaiah’s prophesies the dessert blooming like Butchart Gardens, and healing for the blind, the deaf and the lame.

And on Advent’s final Sunday, what seems the most impossible dream of all—a young woman will bear a son, who will be called Emmanuel, God-with-Us.

These visions of a redeemed world, of a peaceable Kingdom, might seem less practical than some of our Gospel readings for Advent, which call us to action. Last week, Jesus told us to stay awake and be ready. Today, John the Baptist tells us to repent. But we find the dream again in the Gospel for the third week of Advent, when Jesus himself speaks not only of healing for the blind, the deaf and the lame, but of the raising of the dead.

The Gospel for the fourth Sunday of Advent tells us about an actual dream—the dream of St. Joseph. But most importantly, it returns to that vision of Isaiah: the virgin who will bear a son named Emmanuel.

We cannot look at Advent—a time of preparation—without thinking of conversion, repentance, and our Christian duties. That’s why we have penitential services and special opportunities for works of charity and service; it’s why almost everyone finds time to get to Confession before Christmas and why so many are hauling groceries for the needy, donating to good works, and—in some cases—giving the poor the precious gift of their own time.

But all these good things must be fired by a dream—not by a complaint. We don’t help our refugee family because the Government’s not generous enough; we help them because we’ve caught the vision of nations streaming to the mountain of the Lord’s House.

We welcome them, as St. Paul says in today’s second reading, just as Christ has welcomed us—for the glory of God.

The vision of Nelson Mandela remains unfulfilled; South Africa still has grave social problems, some of them traceable to the evils of apartheid. The dream of Martin Luther King also has some distance to go before it is realized, as economic and social problems continue to weaken many poor African-Americans.

But a great dream is meant to last—it does not expire, and it continues to inspire so long as it is shared.

Christians have held on to the promise of Christ’s coming and to a new and perfect world for almost two thousand years. Advent is the time we renew our hope in what is to come, even amidst the imperfections we find in ourselves and in our world.

Any South African, black American, or Christian could begin a speech with “I have a complaint.” But only those who say “I have a dream” are likely to make a difference.

Of course we must be clear: Dreams come first, but deeds must follow.

To give the last word to Nelson Mandela, “Our daily deeds … must produce … a reality that will reinforce humanity's belief in justice, strengthen its confidence in the nobility of the human soul and sustain all our hopes for a glorious life for all.”

Daily deeds, driven by a hope-filled vision: there is a formula for a great Advent that will lead us to a joyful Christmas.
Posted by Msgr. Gregory Smith at 7:28 AM